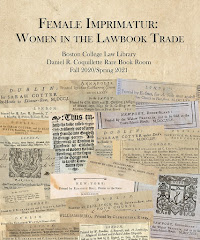 [We have the following announcement of an online exhibit at Boston College Law School.  DRE]

Female Imprimatur: Women in the Lawbook Trade.  This exhibit was inspired by the 100th anniversary in August 2020 of the ratification of the 19th Amendment, which granted suffrage to some—though certainly not all—American women. In the summer before the anniversary, Rare Books Curator Laurel Davis, Professor Mary Bilder, and Associate Law Librarian Helen Lacouture went digging into our special collections to find lawbooks with imprints featuring women printers and booksellers.