Gilhooley on slavery and the Constitution 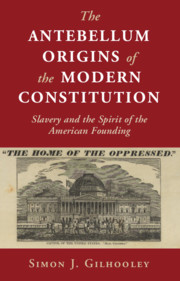 This book argues that conflicts over slavery and abolition in the early American Republic generated a mode of constitutional interpretation that remains powerful today: the belief that the historical spirit of founding holds authority over the current moment. Simon J. Gilhooley traces how debates around the existence of slavery in the District of Columbia gave rise to the articulation of this constitutional interpretation, which constrained the radical potential of the constitutional text. To reconstruct the origins of this interpretation, Gilhooley draws on rich sources that include historical newspapers, pamphlets, and congressional debates. Examining free black activism in the North, Abolitionism in the 1830s, and the evolution of pro-slavery thought, this book shows how in navigating the existence of slavery in the District and the fundamental constitutional issue of the enslaved's personhood, Antebellum opponents of abolition came to promote an enduring but constraining constitutional imaginary.

"Gilhooley gives us a new and profoundly original account of the roots, during the era of slavery, of today's battles over constitutional interpretation. In the process, he reconceives the political legacy of the 1820s and 1830s, scrambles our contemporary assumptions about the ideological meaning of the different theories of the Constitution, and thoroughly dissects the American worship of the founders. This is a terrific book and one to be returned to again and again." -Aziz Rana

"This book is convincing and profound: a real tour de force. Gilhooley is immensely clarifying on points of history, political theory, and legal/constitutional development precisely because he integrates them. His argument that originalism emerged as a response to the exigencies of antebellum debates will be a touchstone for a very long time." -David Waldstreicher