Socialism and Legal History: The Histories and Historians of Law in Socialist East Central Europe, edited by Ville Erkkilä and Hans-Peter Haferkamp has been published in the series Routledge Research in Legal History: 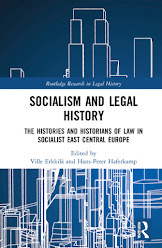 This book focuses on the way in which legal historians and legal scientists used the past to legitimize, challenge, explain and familiarize the socialist legal orders, which were backed by dictatorial governments.  The volume studies legal historians and legal histories written in Eastern European countries during the socialist era after the Second World War. The book investigates whether there was a unified form of socialist legal historiography, and if so, what can be said of its common features. The individual chapters of this volume concentrate on the regimes that situate between the Russian, and later Soviet, legal culture and the area covered by the German Civil Code. Hence, the geographical focus of the book is on East Germany, Russia, the Baltic states, Poland and Hungary. The approach is transnational, focusing on the interaction and intertwinement of the then hegemonic communist ideology and the ideas of law and justice, as they appeared in the writings of legal historians of the socialist legal orders. Such an angle enables concentration on the dynamics between politics and law as well as identities and legal history.

Studying the socialist interpretations of legal history reveals the ways in which the 20th century legal scholars, situated between legal renewal and political guidance gave legitimacy to, struggled to come to terms with, and sketched the future of the socialist legal orders. The book will be a valuable resource for academics and researchers working in the areas of Legal History, Jurisprudence and Philosophy of Law and European Studies.

About the editors: Ville Erkkilä is a Postdoctoral Researcher at the Center for European Studies, University of Helsinki, Finland. Hans-Peter Haferkamp is Full Professor of Private Law and History of German Law. He is the Director of the Institute of Modern History of Private Law, German and Rhenish Legal History, University of Cologne.

1 The transformations of some classical principles in socialist Hungarian civil law: The metamorphosis of ‘bona fides’ and ‘boni mores’ in the Hungarian Civil Code of 1959
András Földi

2 We few, we happy few? Legal history in the GDR
Martin Otto

3 Roman law studies in the USSR: An abiding debate on slaves, economy and the process of history
Anton Rudokvas and Ville Erkkilä

4 Strategies of covert resistance: Teaching and studying legal history at the University of Tartu in the Soviet era
Marju Luts-Sootak

8 Getaway into the Middle Ages?: On topics, methods and results of ‘socialist’ legal historiography at the University of Jena
Adrian Schmidt-Recla and Zara Luisa Gries