Curating the Legal Landscape in Iceland

With its recent approval of the Icesave deal, the Icelandic Parliament seems to have bought the nation about eight years to get its economic house in order.  The Althingi has agreed to repay $5.5 billion in loans to the UK and the Netherlands, whose citizens were major depositors in Icelandic banks before their collapse, but no payments are due for the next seven years, and repayment obligations cease after 2024.  The agreement sets Iceland on the road to receiving $4.6 billion in IMF bailout funds, which will allow the central bank to ease the capital controls it imposed in the wake of the crisis.

What does this have to do with public legal memory?  One important source of economic stability in Iceland over the long term lies in the development of its tourist economy, and cultural tourism is bound to play an important part in that growth.  Right now, this country is a destination of choice for nature lovers, but many Icelanders hope that in time its extraordinary history and heritage also will come to play a substantial role within the nation’s tourist profile.  This is to say that as part of its effort to get its economic house in order, Iceland will increasingly sell its past, including its unique legal history, to outsiders.  As this development proceeds, the challenge faced by public educators will be how to present Iceland’s legal past to tourists given that the relation between law and land at the heart of that history, and at the heart of Icelandic identity, is mediated by an illusive and quickly fading folk memory.

With Thingvellir, the burdens of that challenge will weigh most lightly. Thingvellir is as much a structure as a place.  No artifacts exist as tokens of the chieftain assemblies which took place there a thousand years ago, and which distinguish the legal history of this Germanic nation from that of Anglo-Saxon England, but it’s very easy to imagine what took place.  You don’t need to be William Collingwood to picture the assembly circles, the cloth-covered booths, and the mediation of disputes occurring within the craggy setting of a grand tectonic fissure.  The landscape is architectural in a way that seems positively to invite the visualization of a human presence. 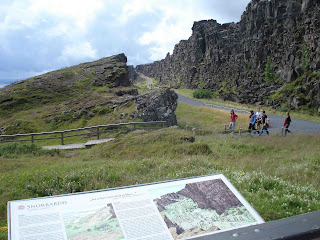 But the sites of Skálholt and Reykholt point to greater, and more common, pedagogical difficulties.  These are places of tremendous symbolic importance to Icelanders, but in both places the landscape offers few tangible clues of that significance.  The church at Skálholt is a modern building, and the landscape itself seems totally empty (at left below, on the road to Skálholt). 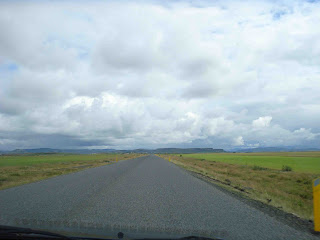 An uninformed visitor would never guess that this was once the epicenter of all Icelandic learning, the heart of its intellectual and cultural life, and the administrative hub of the church.  But the place is packed with historical memories actively nurtured and treasured by Icelanders.  Similarly, everyone knows that Reykholt was the seat of the great Snorri Sturluson, and every summer tens of thousands of people visit the bathing pool of the man whose family gave its name to the civil war through which Iceland lost its independence in 1262.  Yet the pool and its environs have a completely mundane air about them—for the outsider, certainly, not sacral but utilitarian.  In both sites, moreover, artifact remains are scant, and any significant pieces seem to be in the possession of the National Museum in Reykjavik.  Finally, the exhibitions at Skálholt and Reykholt have been mounted, almost as a matter of necessity, by the most important institution on the two sites, namely the church, and they are housed in church basements, cut off from view of the land in which the cultural significance of the place is lodged.  The museum at Reykholt, which celebrates the life of Iceland’s single most important author, a man whose work is part of the cultural patrimony of all Europe, is mounted in a room that also is used for funeral receptions.

As Stephanie and I have followed the sight-seeing path marked out by the Iceland Saga Trail Association, we’ve been struck by the various ways in which far-flung curators across Iceland have sought to address the difficulty exemplified by Skálholt and Reykholt: the land is filled with memories, and the land is empty.  Some curators have been remarkably successful in meeting that challenge.  The Settlement Exhibition in Reykjavik surrounds a Viking-age turf longhouse excavated in the center of the city with a 360-degree image of how the land likely appeared in the tenth century, and the excavation itself can be viewed from above ground through a street-level glass enclosure—a beautiful architectural metaphor for the proximity of the medieval past here. 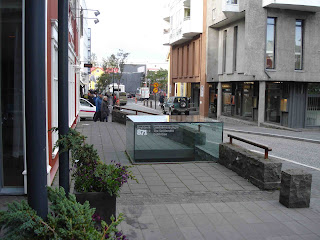 The exhibition accomplishes through fine curatorship what Thingvellir does naturally, maintain the sense of place that grounds Icelandic history.  Similarly, the Settlement Center in Borgarnes relies on multi-media installations to bring the visitor into the land outside the exhibition hall.  (The center currently is developing an exhibition about the Althing.)  The Saga Center in Hvolsvöllur tells the story of Njal’s Saga through a carefully scripted audio guide before sending visitors, at least theoretically, out to a host of local sites associated with the man known for his forbearance and wise legal council (Njal's farmstead is pictured at right below). 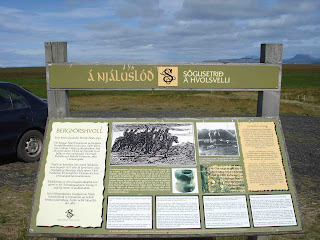 To bring out the cultural and historical significance of the land, a significance that so often sounds in law and society terms—that’s what the most incisive museums and history centers here seek to do.

These are worthy efforts, but there are worrying signs for those concerned about the future of Icelandic public legal memory.  Throughout the country, one naturally encounters the kitsch which will only proliferate with increasing tourism—the kind of stuff that, in its mass produced quality, seems to define itself against historic and geographic particularity.  But I don’t worry much about this kind of thing, which after all is a presence in any country that attracts a significant number of travelers.  The best response to a plastic Viking helmet, or to the “cultural theme hotel” in Reykholt, with its loftily-named restaurant, is to laugh. 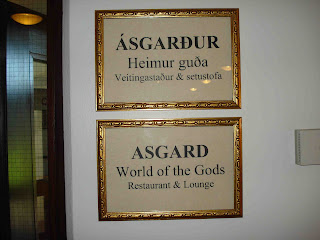 More troubling, and more revealing, are certain trends within the popular culture consumed by Icelanders themselves, especially tendencies to celebrate hyperviolence or, more pointedly, the subversion of law.  One recent incarnation of that tendency is a controversial music video released by the group Berndsen, which involves a carnivalesque overturning of law, and life, in the symbolically charged setting of the Icelandic countryside.  In the video, a group of young people come upon the scene of a car crash and play bloody and perverted games with the bodies of the victims.  A discussion of the controversy, with a link to the video, can be found here.  The video expresses a deep cultural anxiety about the association of land, law, and community that has defined Iceland for generations.  We are a long way from a land knit together by the common legal identity established at Thingvellir in 999/1000; we are in a subculture whose ironic self-consciousness is characteristic of a nation torn within a generation from its communitarian folk roots and the law that sustained it.

The Berndsen video engages the same cultural dynamic as the legal history sites we visited on our tour, and it is as much a part of the future of Icelandic legal consciousness and legal memory as the harsh light that academic history will throw on popular antiquarianism.  Like new efforts in public history, the video responds to circumstances that are putting pressure on the link between legal memory and the environment in an age of global capital flows and European economic integration.  In this respect, those concerned about the future of the public understanding of law on this remote island in the Atlantic will have to wait and see whether Icelanders, who have modernized their nation so boldly and admirably since World War II, can advance a vision of development that is not only environmentally but also culturally sustainable.

Note: My next post, about applying for a Fulbright and what opportunities exist for legal historians, will be my last.  Thanks to all of you who have written with your comments and questions!