The United States Studies Program of the Woodrow Wilson Center is holding a book launch for Lift Every Voice: The NAACP and the Making of the Civil Rights Movement, by Patricia Sullivan, University of South Carolina, in the Center’s 5th Floor Seminar Room, 1300 Pennsylvania Avenue, N.W., Washington, DC., on Thursday, September 17, 3:00 – 5:00 p.m. Commentators are Julian Bond, University of Virginia, and Kenneth Mack, Harvard Law School. Here’s the Wilson Center’s description: 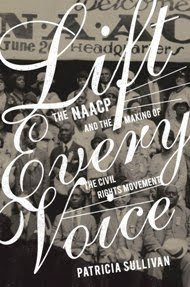 Legal struggles or mass demonstrations--which tactics proved more important in ending racial segregation in the United States? Historians as well as activists have long debated this question. In Lift Every Voice, Patricia Sullivan traces the roots of the civil rights movement of the 1960s back to 1909 and the founding of the NAACP. Chronicling the complex history of the organization and its many prominent leaders, both black and white, she examines debates over tactics and the strategies that led to key court decisions such as Brown v. Board of Education. By shifting the focus from mobilization to litigation, this book challenges reigning paradigms in the field. Join us for a discussion of how interpretations of the history of the civil rights movement are changing, and what that means for activism today.

The event is free and open to the public, but RSVPs are requested to usstudies@wilsoncenter.org.

Update: via an email sent out on September 8, the Wilson Center corrected the previously announced time of 2-4 for this session. It will be held from 3-5.
Posted by Dan Ernst at 1:19 AM