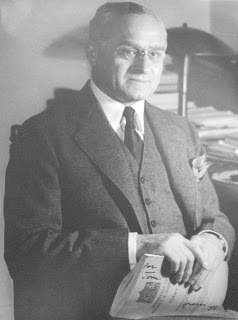 When I posted the abstract for Charles Barzun's paper on Jerome Frank's Law and the Modern Mind, I was reminded of an exchange between Frank and Felix Frankfurter in 1935, which I happened to stumble upon (again) this week. Frank had just been "purged" from the Agricultural Adjustment Administration. He landed at the Reconstruction Finance Corporation and then was loaned to the Public Works Administration to defend the PWA in a constitutional challenge to its funding of municipal power companies. The "Power Trust" was one of Frankfurter's great foes, and he was concerned that Frank might say something outré and alienate the judges. "It is extremely important to try to employ familiar concepts, expressed in very familiar, simple, unarousing language," the Harvard law professor advised.

Frank, who held the gossip of Frankfurter's protege Thomas Corcoran partially responsible for his firing, did not feel in need of instruction. "My strategy has been exactly that suggested by you, to assert on behalf of the government no more power than is necessary to justify the precise action heretofore taken by it. You ought to know that I do not believe in trying to vindicate abstract principles and that the thing to do is to win particular cases."

The two fired further rounds at each other, including Frankfurter's declaration, "Of course I still continue to think that you are wrong in thinking, as I believe you think, that most of law is bunk, but that you dish up the bunk because other people like to feed on it." Frank replied,

I don't say that "most law is bunk." You remember the farmer who was asked if he believed in baptism and who replied "Believe in it? Hell, I've seen it." I think "law" is damned real. But I do not believe that it works the way it appears, on the surface, to work. I think that many legal ceremonials could be eliminated. But while they exist, they play an important part in their effects on human lives. Therefore, as lawyer, I want to be well up on them and meticulously practice them. To use highbrow terms, I think that, pragmatically, practice, procedure and substantive law intermingle or, to put it differently, "substantive law" is merely one of the implements used in a court fight, one of the implements of persuasion used to induce a court to issue an order which will be backed by armed force, if necessary, to compel someone to do what your client wants him to do.

I think that your post re: "Hell I've Seen it!" demonstrates Judge Frank's penchant for realistic and down to earth view of the law that only a seasoned litigator can have. (Frank was a litigator from 1912-1933). Today and maybe at the time this philosophy or bent was termed "legal realism." His views are best expressed in his 1949 book Courts on Trial: Myth and Reality in American Justice.

In Courts on Trial, Frank demonstrates his litigator's acumen taking Justice Cardozo to task for "exploiting legal magic (rule-magic) when [Cardozo] said that most legal rules, 'have such an element of certainty' that well trained lawyers can predict most decisions." (Id. at 57). As a former litigator I would have liked life to be so easy. Now, as an academic I would truly like this type of predictability, so that I can figure out where appellate courts are going.

Although Justice Frankfurter also litigated cases, in private practice, when he worked for the New York firm, Hornblower, Byrne, Miller and Porter, as an ADA, and then when he was on Harvard's Law faculty, his bent was much more erudite and academic. He also, did not have Frank's longevity in litigation - twenty one years.

What is remarkable about their regular tiffs or more correctly, as you point out, sometimes verbally brutal conflicts is that both were progressives, and supported similar causes. Could it be that Frankfurter who began his political life as a Republican supporting Theodore Roosevelt, and apparently was quite bitter when Wilson won the election in 1914, beating Roosevelt, had a completely different world view? Recall that Frank grew up in a hard scrabble neighborhood in New York. Frankfurter spent his formative years in Vienna, immigrated to New York at age 12, and was scion to a long line of Rabbis?

Finally, I would just like to add a point to your post. During the New Deal Frank served as general counsel of the Agricultural Adjustment Administration he was purged along with a group of a young cadre' of so-called leftist lawyers in his office. However, FDR immediately appointed Frank special counsel to the Reconstruction Finance Association.

In addition, Roosevelt named him a commissioner of the SEC. Frank served as an SEC in including as Chairman from 1939 and in 1941 as Chairman, and subsequently to the Second Circuit. So FDR must have at least respected Frank. Of, course one could spin it that FDR wanted to get rid of Frank so he sent him off to New York. But the President need not have done that. He could have sent Frank packing. We all know what happened to Frankfurter.