War and Taxes, by Steven A. Bank, Kirk J. Stark, and Joseph J. Thorndike has just been published by the Urban Institute Press. I haven't seen this book yet, but it is on my summer reading list. A book on this topic is welcome, since tax policy is one way that war-related statebuilding is accomplished. 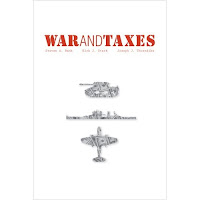 During World War II, Americans were urged to ration food, raise money, and accept higher taxes. After September 11, we were given tax cuts and asked to shop. Has the United States broken a noble tradition of fiscal sacrifice with the current, unprecedented wartime tax cuts, or are they the mark of new economic, and social forces at work? War and Taxes weighs the question by considering six conflicts that span the American Revolution to the present war in Iraq.
And the blurbs:
“War and Taxes complicates the U.S. mythology of shared sacrifice during war. Rich in history, lucid in style, War and Taxes reveals that national leaders have asked Americans to shoulder heavier wartime fiscal burdens from the Revolutionary War to the war in Iraq. The book also reveals, however, a strong historical undercurrent of resistance to wartime taxation. Thus, while it is fair to criticize the Bush administration for prosecuting the war in Iraq with borrowed money and by shifting the huge price tag to future generations, War and Taxes shows that previous generations of Americans also had a penchant for shifting fiscal burdens forward in time.”
—Dennis J. Ventry Jr., Assistant Professor of Law, American University, Washington College of Law

“Rarely does a work of history illuminate the present as much as War and Taxes. This fascinating account of the politics of American wartime taxation from the Revolution through the Iraq conflict shows that the Bush administration’s policy of cutting taxes while waging war marks an abrupt departure from the strong, but often fiercely contested, American tradition of fiscal sacrifice. It’s a must-read for those interested in taxation, war, and how each shapes the other.”
—Joel Slemrod, Paul W. McCracken Collegiate Professor of Business Economics and Public Policy and Director, Office of Tax Policy Research, University of Michigan
The Table of Contents is here. Read the introduction here.
Posted by Mary L. Dudziak at 10:34 AM