Reviewed: Wilentz, The Age of Reagan

THE AGE OF REAGAN: A History, 1974-2008 by Sean Wilentz (Harper) is reviewed by Kevin Phillips for the Washington Post. For Phillips, "Wilentz deserves kudos for biting off a challenge that few historians would have dared to undertake." Rather than a more confined history, the author "goes for sweep, and in a number of ways achieves it." Wilentz is right, Phillips argues, that 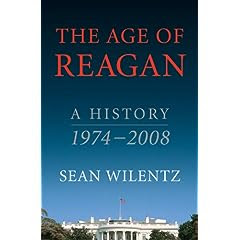 although a major trend to the right in U.S. national politics began in the 1960s, Democratic leaders time after time found some reason for perceiving an ongoing or restored liberal dominance -- in 1974, in 1982, in 1986-88 and at both the beginning and conclusion of the Clinton era. Reagan was the most successful Republican president of the 1960-2008 period, which can reasonably support naming the larger era after him....

The author "is also reasonably correct when he says the unfolding conservative zeitgeist of late-20th-century America produced a string of excesses from Watergate and Vietnam down to the George W. Bush years." However, "by formally beginning his narrative in 1974, he manages to avoid any serious analysis of the three-tiered Democratic failure under Lyndon Johnson."
Continue reading here.
Posted by Mary L. Dudziak at 9:04 AM