"We are at War and You Should Not Bother the President": The Suffrage Pickets and Freedom of Speech During World War I is a new paper by Catherine J. Lanctot, Villanova University School of Law. The paper draws upon the archives of the National Women's Party, and is part of the author's on-going work on women's rights activist Alice Paul. Those familiar w

ith women's history will find the author's statements a bit strong when she says the story of Alice Paul and the White House protests is "almost unknown." I believe I first read about it in Eleanor Flexner's classic Century of Struggle while in graduate school, and I always teach about it in my 20th century constitutional history course. But it is certainly the case that there is much more to learn from this history, and the author is right on point when she notes that woman suffrage should be part of the history of struggles over rights in wartime. And there is certainly more to say about the legal history of this conflict. I will look forward to more from Lanctot on this. Here's the abstract:
The story of Alice Paul's National Woman's Party and its 1917 picketing campaign on behalf of woman suffrage is almost unknown in legal circles. Yet the suffrage pickets were among the earliest victims of the suppression of dissent that accompanied the entry of the United States into World War I. Nearly forty years before the modern civil rights movement brought the concept of nonviolent civil disobedience to the forefront of American political discourse, the NWP conducted a direct action campaign at the very doorstep of the President of the United States, and they did so during a time of war.

In the course of this campaign, Paul and her supporters learned to use the apparatus of the municipal courts and the prison system to focus attention on the powerlessness of women, while at the same time elevating their very real suffering to a kind of suffrage martyrdom. Their principal goal was to keep pressure on government officials so that the cause of woman suffrage would not be swept away in the wartime hysteria that gripped the nation in 1917. As the police regularly hauled them off to jail, however, the suffragists began to real 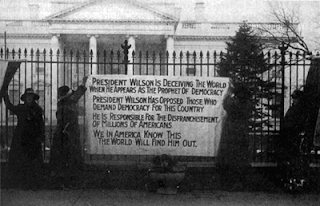 ize that their ability to pursue that goal hinged largely on the recognition of a constitutional right to free speech.

This Article represents the first step in recovering this forgotten story. I present, for the first time, a detailed narrative account of the legal battles of the suffrage pickets of 1917, beginning with the first round of arrests in late June, and concluding with their victory in the Court of Appeals in March 1918. Although the women themselves did not directly shape legal doctrine, the saga of the suffrage pickets provides an excellent vehicle for examining the emergence of free speech consciousness during 1917. Bringing the story of the suffrage pickets to the attention of legal scholars may cause a significant reevaluation of the traditional narrative of First Amendment history.
Posted by Mary L. Dudziak at 7:47 AM