Schulman and Will review Perlstein, Nixonland

Nixonland: The Rise of a President and the Fracturing of America by Ri 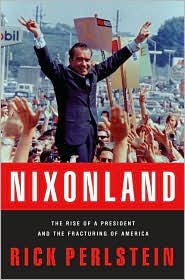 ck Perlstein (Scribner) is reviewed today by Bruce J. Schulman, Boston University, the in the Boston Globe and by George F. Will in the New York Times. Schulman finds it "a vivid, cinematic history of American politics in the 1960s and early 1970s. In bracing prose, Rick Perlstein propels us through the epic events, the assassinations and protests, somber news broadcasts and irreverent television comedies, as he recounts the dramatic decade-long turnaround that continues to shape our national life."
According to Schulman,

if ordinary voters occupy the leading roles in Perlstein's account, a "strange, stiff man" lurks in the shadows, never far from center stage. Nixon grasped the demands of a new age of mass media (however bad he looked on television himself). Driven by rages and resentments, Nixon also embodied the insecurities that ate at the hearts of millions of white, middle-class Americans, for whom the turmoil of the '60s - war and protest, the violence in Watts and other inner cities, the outrageousness of the counterculture, pornography and affirmative action - had proved deeply unsettling....Bucking the conventional wisdom, Perlstein recognizes Nixon's central role in the rise of the American right.

George Will's lengthy first-page NYT review finds Nixonland a "high-energy — sometimes too energetic — romp of a book also serves, inadvertently, a serious need: it corrects the cultural hypochondria to which many Americans, including Perlstein, are prone." The author's "thorough excavation of the cultural detritus of that decade refutes his thesis, which is that now, as then, Americans are at daggers drawn."

Perlstein’s thesis is that America became Nixonland because of “the rise of two American identities” in the 1960s — actually between 1964, when Johnson won 61.1 percent of the vote, and 1968, when the combined votes for Nixon and George Wallace were 56.9 percent. Perlstein says Nixon’s legacy is the “notion that there are two kinds of Americans.” On one side of the barricades are “values voters” and other conservatives who are infuriated by the disdain of amoral elites conservatives consider (in the brilliantly ironic phrase that Perlstein appropriated from Kevin Phillips) a “toryhood of change” determined to supervise their lives. On the other side are Hofstadterian liberals who feel threatened by these nincompoops who have been made paranoid by their status anxieties.

While Perlstein argues that Nixonland is still a feature of American politics, Will argues that "America has long since gone off the boil."
Posted by Mary L. Dudziak at 10:20 AM

Thanks so kindly for taking notice of NIXONLAND. I'll be eager to have your thoughts if you read it. The Thurmond book looks fascinating!

The lancing "off the boil" of Nixonland has left a residue of scars, notwithstanding George Will