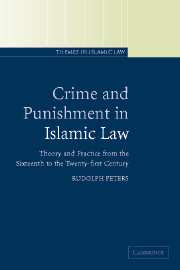 Rudolph Peters, Crime and Punishment in Islamic Law: Theory and Practice from the Sixteenth to the Twenty-first Century (Cambridge: Cambridge University Press, 2005) is reviewed for H-Levant by Kent F. Schull, Department of History,University of Memphis. Hat tip. Schull finds the book

an excellent, accessible, clearly delineated, and insightful introduction to the development, doctrine, and practice of Islamic criminal law from the sixteenth century to the present. Peters's volume,the second in the Cambridge University Press series Themes in Islamic Law, brings together various lines of scholarship on practice and theory into one well-organized work divided into six chapters, including a brief introduction and a conclusion.

For Schull, chapter 3 is the author's strongest. "Peters utilizes the Ottoman Empire as a case study to explore the implementation of Islamic criminal law and to illustrate its relationship with state authorities during what he refers to as 'the pre-modern period' (sixteenth to eighteenth centuries)." He demonstrates "the Ottoman state's weighty influence on the implementation, interpretation, and enforcement of Islamic criminal law." The author "also effectively illustrates the interaction of state (qanun) and Shari`a law in the state's efforts to maintain power and order."
Overall, the book "makes an invaluable contribution to the fields of history, Islamic studies, and comparative legal studies, and will, I believe, serve as the impetus to additional research."
The full review is here.
Posted by Mary L. Dudziak at 10:56 PM

Should anyone be interested in a fairly decent bibliography for Islamic Law (constraints: books only, in English), there is a section on same in my bibliography for Comparative Law, available here: http://ratiojuris.blogspot.com/2008/04/international-law-human-rights.html