As I mentioned in an earlier post, my American legal history course is organized around the emergence and consolidation of political regimes, an approach that requires much discussion of administrative state-building--and presents a problem. By the last semester in law school (which is when most of my students take the course), most students have had plenty of opportunities to envision themselves in a court, through first year legal research and writing, moot courts, evidence and trial practice courses, or Georgetown's clinics. In contrast, few have had courses or experiences that would help them imagine what it would be like to lawyer within or before an agency in the federal bureaucracy. Even courses in which administrative rulings and regulations bulk large typically leave students with only a general understanding of the institutions that made them. The need to cover difficult legal doctrine is too insistent, and, in the Administrative Law course, at least, the landmark cases come from so many agencies that the teacher scarcely know which ones to attend to in depth. To be sure, legal educators since Willard Hurst (pictured at right) and Lloyd Garrison (in their "Law in Society" materials, prepared in the late 1930s) and Milton Katz (in his Cases and Materials on Administrative Law (1947)) have tried to address the problem by focusing on one or only a few agencies; still, I am far more confident that my students are in the same ballpark with me when I discuss the oral argument in a great U.S. Supreme Court case than when I discuss the work of the Review Division of the National Labor Relations Board in the 1930s.

One solution is to give the students an ideal type of bureaucracy, but until recently the most obvious candidate, Max Weber's definition in Economy and Society, misled, in the American case, as much as it enlightened. To be sure, I assign the passage to my students: it states more precisely whatever notion of bureaucracy they bring to the class, and it or something like it was the ideal of the political scientists who appear in the course (such as Woodrow Wilson, Louis Brownlow, and Leonard White). But the leap from Weber's orderly hierarchies, settled jurisdictions, and well-defined channels of appeal to the loose-jointed, conflict-ridden, politically beset officialdom of, say, a federal executive department is just too great for students to make unassisted.

The last few years I've added a note on Daniel P. Carpenter's Forging of Bureaucratic Autonomy: Reputations, Networks, and Policy Innovation in Executive Agencies, 1862-1928 (2001). Carpenter’s interest, like that of other scholars in the American Political Development tradition, is to account for how America’s bureaucracies acquired something like the “autonomy” of their European counterparts. That is, how did the American officialdom acquire the ability to act in ways that neither politicians nor organized interests preferred but were unable to check or reverse. Convinced that too much attention has already been lavished on the study of independent commissions (such as the Interstate Commerce Commission), he turns to the executive departments, in particular, the Post Office, the Department of Agriculture, and the Department of the Interior. Each department had a three-tiered organization, illustrated in Figure 1.1. of the book. At the top is the secretariat, which consists of the secretary, his or her assistants, and their executive staff. Secretaries are short-term political appointees who often have little experience of the department’s missions. At the bottom are “operations” officials, the people who actually perform the department’s basic jobs. Until the twentieth century, they were usually patronage appointees little interested in institution-building in the agency in which they happened to find a berth. Between these two tiers are “mezzobureaucrats”: bureau and division chiefs, program planners, and monitors. They are the department’s most enduring actors, who, thanks to civil service reforms, usually kept their jobs from one presidential administration to the next. Because of their long tenure, bureau chiefs tended to build up stable relationships with oversight and appropriations committees in Congress which earned them some room to maneuver in the conduct of their official duties.

Carpenter devotes the bulk of his book to showing how mezzobureaucrats built or, in the case of Interior, failed to build, the autonomy of their agencies. The note I assign summarizes one of his illustrations--Seaman Knapp and the Bureau of Plant Industry in the U.S. Department of Agriculture--but rather than go into his case studies in detail I have the class read a vivid and thoroughly researched article on the Bureau of Immigration and the Department of Commerce and Labor during the secretaryship of Charles Nagel (1909-13; pictured at left), written by Michael J. Churgin of the University of Texas Law School, which appeared in the Texas Law Review 78 (2000): 1633-59. In class, my first step is to ask the students fill in, as it were, Carpenter's Figure 1.1, with the various actors Churgin describes. The mezzobureacrat in this case was Daniel Keefe, a former president of the longshoremen's union, whose service as Commissioner General of Immigration antedated Nagel's own appointment. Keefe worked to expand the grounds for excluding immigrants; Nagel, out of sympathy for the immigrant and respect for the political clout of their organizations, often overturned Keefe's decisions and sought his ouster, but President William Howard Taft could not afford to alienate organized labor's allies in Congress and the electorate and refused to discharge him. 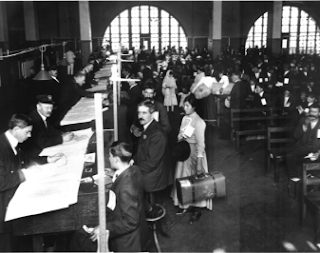 Once these facts are on the table, I ask my students to point out ways in which the nation's immigration bureaucracy departed from Weber's ideal type and to consider what role lawyers might play in such a contested bureaucratic terrain. For the latter point I summarize a second article by Churgin, which described how Simon Wolf of the the Hebrew Sheltering and Immigrant Aid Society provided Nagel with information about appeals that he could not get from his own immigration bureaucracy. I also ask students to read excerpts from Louis Anthes's article on lawyers and the inspection procedures at Ellis Island. It turns out that one-shot lawyers who demand that inspectors respect judicial norms of due process get nowhere; repeat-players who learn the inspectors' informal rules and procedures do better.

Of course, Carpenter's Figure 1.1 is not an infallible guide to all the public bureaucracies one might study in a legal history course, but I find it serviceable in other parts of the one I teach. For example, I focus on Jerome Frank at the Agricultural Adjustment Administration when I discuss New Deal lawyering. After Carpenter and Churgin, my students are ready to see how problems could emerged when the AAA was lodged within the U.S. Department of Agriculture and Jerome Frank, AAA's general counsel, viewed himself as the guardian of Secretary Henry A. Wallace's policies against the conflicting wishes of the AAA's mezzobureaucrats. A few classes later we take up the Morgan decisions of 1936 and 1938. In these landmarks in the history of administrative law, Chief Justice Charles Evans Hughes broadly hinted that federal agencies ought to "judicialize" their procedures. Once again, Figure 1.1 and Churgin's chronicle of conflict between departmental secretary and bureau chief come in handy. The U.S. Department of Agriculture had long regulated rates in the meatpacking industry through its Bureau of Animal Industry, headed by the long-serving chief John R. Mohler. During the Republican administrations of the 1920s, Mohler pursued a live-and-let-live strategy with the small businessmen who received and cared for livestock sent to the nation's stockyards, but in the first months of Franklin D. Roosevelt's presidency Henry Wallace decided to lower their fees and drive marginal firms out of business. As the two sorted out their differences, they failed to observe the niceties of administrative procedure. The Morgan decisions were the result.
Posted by Dan Ernst at 8:00 AM