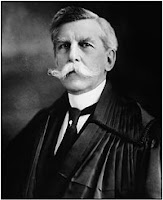 ver Wendell Holmes played as important a part in the development of United States antitrust law as he played in the development of constitutional law for which he enjoys a reputation as a giant in American law. Yet, for the more than sixty years since Holmes's retirement, there has been no comprehensive analysis of his contributions to the regulation of competition in this country. Now there are two.

Almost simultaneously, Professor Alfred Neely of the University of Missouri Law School and I have each published separate articles seeking to unravel whether Holmes had any substantial philosophy underlying his many opinions in a field of law that he found both silly and personally repugnant, and whether Holmes was faithful to his often-articulated view of the role of judges in upholding and implementing statutes with which they personally disagreed.

Professor Neely further alludes to Holmes's influence on modern movements in antitrust such as Law and Economics. But he fails to analyze critical limitations on the often-asserted view of Holmes as the father of the Law and Economics movement and overlooks two additional modern movements for which Holmes can be claimed as a more direct ancestor-namely theories of countervailing power and outright antitrust abolitionists. Professor Neely incorrectly suggests that Holmes is a marginal historical figure for antitrust purposes, when in fact his overarching philosophy, rather than his doctrinal contributions, continues to animate much of current antitrust debate.

My conclusions suggest that Holmes had a coherent, but limited, view of antitrust as the federalization of a common law designed to protect and enhance the value and use of private property. Justice Holmes's views unfortunately did not rise to the lofty standards that he otherwise advocated regarding a judge's duty to implement personally distasteful legislation. Despite all this, Justice Holmes remains a figure of importance and relevance for modern antitrust scholars and policymakers. His narrow and negative view of antitrust is reflected both directly and indirectly in powerful arguments that remain important forces to be reckoned with in the definition of the future of antitrust.
Posted by Dan Ernst at 12:21 PM