I invited Rick Shenkman, Editor of History News Network, to write a guest post about his new book. Shenkman, associate professor of history at George Mason University, is the author JUST HOW STUPID ARE WE: FACING THE TRUTH ABOUT THE AMERICAN VOTER (Basic Books, 2008). He blogs at http://howstupidblog.com/, and you can see him on the Daily Show here. Shenkman writes: 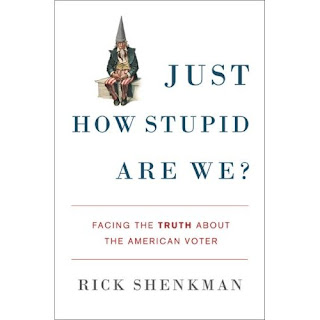 How are lawyers like politicians? Lawyers have to appeal to juries the way pols have to appeal to voters. And often they follow a similar approach. Ask a good lawyer how they win over a jury and they'll say you have to create a narrative the jurors can easily follow. That's just what pols have to do too. I can remember when I was an investigative reporter in Salt Lake City the lead prosecutor in a complicated bribery case told me her greatest challenge was making the convoluted connections between the defendants understandable. It wasn't easy. I doubt whether many jurors at the end of the case had a clear grasp of the case she was making. It involved a security company hired by a utility that contracted with an independent coal operator. So right off the bat jurors had to keep straight who the players were, how these companies interacted, and who was bribing whom to get what. I had reported on the case for a couple of years at my TV station. Some anchors and producers never figured out the relationships even though I did story after story. I am sure many viewers were confused as well.

Like I said politicians face the same challenge as that prosecutor. But with one difference that's paramount. You can't squeeze all of America's voters into a jury box to hear your opening and closing statements and to watch a parade of witnesses. So when you create a narrative it's got to be more than simple and easy to understand. It's got to be so compelling that even people who catch just a smattering of your opening get what you are saying and sympathize with your point of view. So how do you do that? Pols do it by playing off of American myths. Myths aren't lies, though often they include false assumptions and misinformation. Myths are actually pictures of the world in which we live and our place in it. They tell us who we are and what values we cherish. In a contest between the truth and the myth the myth always wins because facts are next to nothing compared with a myth, which lies deeply buried in our unconscious.

Here's where my book comes in. Because voters are beholden to myths they are susceptible to manipulation. The more ignorant voters are about the facts the more easily they can be misled. Ignorant voters are therefore sitting ducks for wily pols who play on myths. This is what happened during the past few years. The Bush administration used myths to appeal to voters. The facts didn't matter until the failures became so overwhelmingly inescapable that finally people had to face them.

What myths did the administration employ? They used the Hitler myth. Hitler of course was real. But the comparison of Saddam and Hitler was not real. But once people came to see Saddam as Hitler all kinds of synapses went off in their heads that made them susceptible to the administration's fear-mongering. By tying Saddam with 9-11 the administration was able to make a convincing case for war.

The consequence was that voters paid little heed to facts. One study by the University of Maryland found that nearly 60 percent of Americans were convinced that Saddam Hussein was helping Al Qaeda when we undertook our invasion. A majority based their support for the war on this flagrant misunderstanding. Fifty percent of Americans continued to believe Saddam was behind 9-11 even after the 9-11 Commission set the record straight.

Lawyers sometimes have bad juries who don't pay attention to facts even after they have taken pains to lay them all out one after another. Imagine how much greater the challenge is to get voters to follow the facts then!

Were politicians angels we wouldn't have to worry. But they're not. So we need smart voters. Alas, they don't make up a majority.
Posted by Mary L. Dudziak at 10:38 PM