Sellers on The Origins of Republican Legal Theory 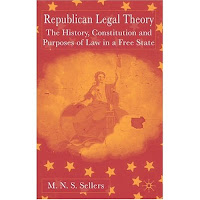 The first self-consciously republican ideology originated in the senatorial opposition to Gaius Julius Caesar, and implies a procedural commitment to certain republican political and legal institutions, usually attributed to Rome's republican constitution of 509-49 b.c. The basic desiderata of republican government, as articulated in the republican legal tradition derived from Rome, secure government for the common good through the checks and balances of a mixed constitution, comprising a sovereign people, an elected executive, a deliberative senate, and a regulated popular assembly, constrained by an independent judiciary, and subject to the rule of law. Some republicans would add representation, the separation of powers, or equality of material possessions, to protect public liberty (libertas) and avoid Rome's eventual descent into popular tyranny and military despotism. Republican liberty signifies subjection to the law and to magistrates, acting for the common good, and never to the private will or domination dominatio of any private master.
Posted by Mary L. Dudziak at 6:30 AM