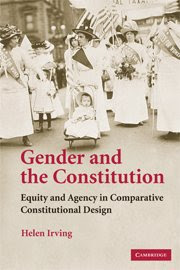 Many of the world’s constitutions were written in recent times, in some cases following a dramatic break with an earlier system of government, and in others through a deliberate choice to modernize. Many older constitutions are currently under review. Whether old or new, no democratic constitution today can fail to recognize or provide for gender equality. Constitution makers need to understand that constitutions are historically “gendered” and remain so; their provisions often have a disparate or differential impact on women, even where they appear gender neutral.

This book considers what needs to be taken into account in writing a constitution when gender equity and agency are goals. It does so by examining principles of constitutionalism, constitutional jurisprudence, and history and applying a “gender audit” to existing constitutions.

Helen Irving holds degrees in political science, anthropology, history, and law. She currently teaches in the Faculty of Law at the University of Sydney. Professor Irving has taught political science and law in several Australian universities since her first appointment in 1977 and was visiting professor at Harvard Law School from 2005 to 2006. She is the author of To Constitute a Nation: A Cultural History of Australia’s Constitution and Five Things to Know about the Australian Constitution. She is also the editor of A Woman’s Constitution?: Gender and History in the Australian Commonwealth, The Centenary Companion to Australian Federation, and Unity and Diversity: A National Conversation, among others.