Tillery on the GI Bill at the Wilson Center 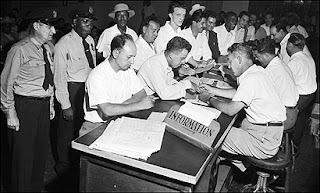 ﻿The Division of United States Studies at the Woodrow Wilson International Center for Scholars announces the latest in its speaker series on new scholarship in race and ethnicity. On Monday, June 23, 2008, from 3:00 to 5:00 p.m., Alvin B. Tillery, Jr., Rutgers University, will present “The Long Shadow of the GI Bill: The Intergenerational Effects of US. Social Policy on the Racial Gap," at the Woodrow Wilson Center, 1300 Pennsylvania Avenue, N.W., Washington, DC. Commentators are Jennifer L. Hochschild, the Henry LaBarre Jayne Professor of Government, Harvard University, and Ira Katznelson, the Ruggles Professor of Political Science and History, Columbia University. The event is open to the public, but reservations are required, here. More details, here.

The G.I. Bill, enacted in 1944 to give returning World War II veterans access to university or vocational education and loans for homes and businesses, helped move a generation into the middle class. Scholars have long acknowledged that white G.I.s benefited far more than African-American veterans, in part because of the unwillingness of many universities to admit African Americans and the similar reluctance of banks to give them housing and business loans. Some African-American G.I.s nonetheless managed to overcome the barriers and take advantage of the program.

Did their success in using the G.I. Bill for socio-economic mobility affect their descendants? Could that success even account not only for their offsprings' economic status but for phenomena such as their performance on SAT scores as well? The survey undertaken by Prof. Alvin B. Tillery, Jr. suggests a direct correlation.
Posted by Dan Ernst at 11:55 AM