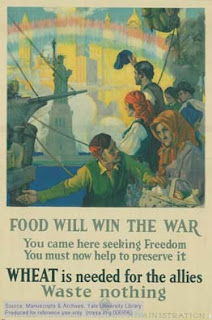 ndation Press (2008)( the 1st. ed. is here). There is much to agree with in this essay, which is a helpful explication of the confusing agricultural policy issues affecting this important case. Chen leaves just one thing out, and it is a very important thing: the impact of World War II on the Court's Commerce Power jurisprudence. This matter surfaced even in the facts of Wickard: Farmer Filburn was confused by a speech given by the Secretary of Agriculture Wickard. The title of the address? "Wheat Farmers and the Battle for Democracy." The importance to the war and national security of American farmers and of federal control over many aspects of the economy including agriculture, was an important issue well known to a Court that had geared up for the war, even if Justice Jackson didn't address it in his opinion.
Here's Chen's abstract:

This article tells the story of Wickard v. Filburn, 317 U.S. 111 (1942). After providing a survey of American agriculture and its regulation between the World Wars, this article describes the constitutional landmark that began as a controversy over Roscoe Filburn's 1941 wheat crop. Wickard v. Filburn represents a pivotal moment in the Supreme Court's effort to define Congress's power "[t]o regulate Commerce with foreign Nations, and among the several States, and with the Indian Tribes." Greater turmoil over commerce clause jurisprudence has breathed new life into Wickard v. Filburn.

Image credit.
Posted by Mary L. Dudziak at 8:25 AM