Purcell on Federalism and Originalism, Basson on Race Mixing, new books on the Bush Administration, Executive Orders, and more

A number of interesting reviews have appeared recently in the Law and Politics Book Review. Here's a round-up:
Edward A. Purcell, Jr., Originalism, Federalism, and the American Consti

tutional Enterprise: A Historical Inquiry is reviewed by Justin Crowe, Department of Politics, Pomona College, who finds it "a provocative and erudite analysis of the historical roots and developmental trajectory of American federalism." Crowe writes:

Edward Purcell offers a “historical inquiry” into the original meaning (or lack thereof) and consequences of federalism as a structural feature of American constitutionalism. Weaving together meticulous historical research, deft analysis of political thought, and wide-ranging exploration of political development, Purcell demonstrates – in clear and methodical prose – how the Constitution “neither gave the federal structure any proper shape as an operating system of government nor mandated any particular and timeless balance among its components” (p.7). Far from having a fixed balance that must be politically recovered and jurisprudentially protected, federalism, Purcell contends, is instead characterized by an “elasticity and dynamism” (p.6) that belies any attempt to articulate the “true,” “proper,” or “original” understanding of the balance between state and national power.

The book does "more than simply illuminate both the theory and practice of federalism," but challenges "the application of a leading constitutional theory and fundamentally reinterpret[s] the meaning and history of a core structural pillar of American government."
Purcell's book

provides for federalism, often misunderstood (especially by students!) as fixed and archaic, something akin to what Richard Neustadt’s famous aphorism – that American government was one of “separated institutions sharing powers” (Neustadt 1990) – provided for the separation of powers: a call for understanding structural features of American government as contested, dynamic, and perpetually evolving. In this way, the book suggests that the relationship between state governments and the national government is characterized by the same type of rich and volatile politics as the relationship between branches of the national government itself.

Second, as befitting historical work that seeks to inform current political and legal practice, ORIGINALISM, FEDERALISM, AND THE AMERICAN CONSTITUTIONAL ENTERPRISE is simultaneously bursting with primary sources and embedded within secondary literature from a range of academic disciplines.

explicit about what it is doing and what it is not doing, even if what it is doing grows dense at points. Purcell cogently and concisely walks the reader through his argument, unpacking the complexities surrounding his subject, bringing new evidence and analysis to bear on those complexities, and helping his audience to gain a more comprehensive perspective on the ideas and debates he analyzes....Given that federalism is a subject many find difficult and dry, attempting to write an accessible and lively book on it is no small task, and succeeding (as Purcell does) no small accomplishment. 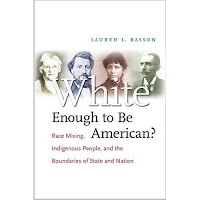 pson, Department of Political Science, SUNY New Paltz, reviews WHITE ENOUGH TO BE AMERICAN? RACE MIXING, INDIGENOUS PEOPLE, AND THE BOUNDARIES OF STATE AND NATION by Lauren L. Basson (The University of North Carolina Press, 2008), finding it to be "a rich, in-depth analysis of racism in the American nation and state." Lipson writes:

At a moment in United States history when Barack Obama is inspiring millions in his presidential bid, the reality of mixed-race Americans is becoming increasingly salient in a nation long obsessed with dichotomous black and white racial categories. With the population of people of color in the United States accelerating at rates unmatched by any other country in the world, racial discourse in the US has gradually come to accommodate the full cast of official minorities, moving beyond the limited focus on blacks and whites. Yet the historical precedent in the United States has been to leave little space for mixed-raced Americans, instead preserving the racial order by forcing them into monoracial categories. As Lauren Basson explains in WHITE ENOUGH TO BE AMERICAN? RACE MIXING, INDIGENOUS PEOPLE, AND THE BOUNDARIES OF STATE AND NATION, the turn of the 20th century proved to be a highly dynamic period that left a major imprint on the distinctive American model of racial categorizations.

Basson’s book conducts a microanalysis of mixed-race indigenous Americans during the period from 1885 to 1905, showing how conflicts over racial identity at the “margins” reveal central dynamics about the US nation and state – in particular, the shifting forms of white supremacy – during this volatile period of United States history....

While the first three chapters focus on how policymakers and the press decided mixed-race individuals’ claims of being American, the fourth and final chapter examines allegations of un-American activity by mixed-race Americans. This chapter highlights Lucy Parsons, a leading anarchist activist who described
her ancestry as Indian and Mexican (but not African). Parsons identified herself as an indigenous American, claiming that the “white capitalists” were the true foreigners. But US officials along with the mainstream media portrayed Parsons and other anarchists as non-white foreigners who threatened American ideology and territorial integrity. Despite Parson’s denial, reporters labeled her as being a Negro, which was part of a concerted effort to further marginalize anarchist activism.

Of theoretical interest is the book’s challenge to Rogers Smith’s “multiple traditions” approach to American political culture. Whereas Smith suggests that racism has been rooted in a discrete, ascriptive/ethnonational tradition that has existed throughout US history alongside liberalism and republicanism, Basson argues that “racism was inherent in the full range of political discourses in the United States at the turn of
the twentieth century” (p.180).

Pfiffner (Brookings Institution Press, 2008) is reviewed by Graham G. Dodds, Department of Political Science, Concordia University. According to Dodds, the author "argues that Bush has not just pushed the limits of executive power but has transgressed them, threatening the very foundations of American government. For Pfiffner, Bush’s actions have challenged and undermined fundamental rights, the balance among the three branches, the possibility of republican government, and even the rule of law."
The book "covers a lot of ground,"

from various background considerations about executive power to four cases of alleged overreaching. This is controversial stuff, and Pfiffner’s account invites a number of criticisms, most of which he seems to anticipate. For example, one might ask whether Pfiffner unfairly singles out Bush. After all, other presidents have engaged in some of these actions, too. Pfiffner concedes that during the twentieth century, most presidents have dominated Congress, but he claims that “this domination reached a peak under the presidency of George W. Bush” (p.57). For Pfiffner, Bush simply went much further than his predecessors.

Ultimately, Power Play "is an accessible account of some the ways in which the Bush Administration has advanced controversial claims about executive power and why their actions are constitutionally dangerous. The book should appeal to scholars of American politics, the presidency, and public law."
Read the rest here.
The Preeminence of Politics: Executive Orders from Eisenhower to Clinton by Ricardo Jose Pereira Rodrigues (LFB Scholarly Publishing, 2007) is reviewed by David Dehnel, Department of Political Science, Augustana College. "According to Richard Neustadt’s classic study, the essence of presidential power is the power to persuade, not command," Dehnel writes.

In this study, Rodrigues is concerned with political checks on presidential power, and, for the most part, sets aside legal considerations. Accordingly, the interaction of law and politics is not much explored in this book, rendering the study less interesting to scholars of public law than, for example, Phillip Cooper’s excellent BY ORDER OF THE PRESIDENT....For Rodrigues, it does not matter whether an executive order has any foundation in statutory or constitutional law, the president is simply exercising power (executive or legislative) that is shared with Congress. As I will argue below, this approach necessitates that the book’s upbeat conclusions be qualified.