"Executive Justice is an Evil" 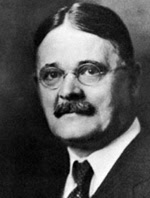 [The following is the third in a series of posts on Roscoe Pound and the administrative state. The series starts here.]

If Roscoe Pound executed an “about face” in his attack on the New Deal in 1938, then the early Pound must have been an enthusiastic advocate of “a large role for administrative agencies” (the words are David Wigdor’s). One imagines him almost as a John the Baptist for his successor as dean, James Landis, who in the same year as Pound’s report for the American Bar Association argued that the “administrative process” was a new and legitimate branch of government. It’s a hard image to reconcile with the Pound who exalted in the trained judge and was almost priggishly averse to lay involvement in the judicial process. For if in Pound’s day some administrators brought to their tasks specialized experience and expertise, many were patronage appointees who little understood the “taught legal tradition” that Pound counted on to safeguard liberty in the Anglo-American tradition. In fact, Pound considered what he variously called the recrudescence of “justice without law,” “the rise of personal government,” and the “growth of administrative law” cause for concern not celebration. “Executive justice is an evil,” he declared in 1907, albeit a necessary one until “the adjustment of human relations by our courts is brought into thorough accord with the moral sense of the public at large.” According to Pound, “The only way to check the onward march of executive justice” was for lawyers “to improve the output of judicial justice.”

In a series of addresses and articles--“Executive Justice” (1907); “Justice According to Law” (1913), “The Revival of Personal Government” (1917); “The Administrative Application of Standards” (1919); and “The Growth of Administrative Justice” (1924)--Pound fit the rise of administration into a cyclical interpretation of legal history as “a constant movement back and forth between wide judicial discretion on the one hand, and strict confinement of the magistrate by detailed rules upon the other hand.” When “justice according to law” became too rigid, a reversion to “justice without law” was required to “bring the administration of justice into touch with new moral ideas or changed social or political condition.” If the new discretionary powers were entrusted to executives, the result “has always been and will always be as crude and as variable as the personalities of the officials” involved. Fortunately, in time the new ideas became embodied in a”a new body of fixed rules.” Infused with “enough of current morality to preserve its life,” justice according to law resumes its proper, dominant place.

Pound saw his cycle at work during Tudor and Stuart England. The rigidities of the common law and its courts led to an enlargement of the Chancellor’s jurisdiction and the creation of Star Chamber and other prerogative courts. The common lawyers responded by abolishing some courts, making over Chancery “along common-law lines” and incorporating the valuable elements of Chancery’s and Star Chamber’s jurisprudence into the common law. “The common law survived and the sole permanent result of the reversion to justice without law was a liberalizing and modernizing of the law.”

Pound believed that the cycle was repeating itself in his day. Boards and commissions had multiplied; judicial control over “arbitrary executive action” had loosened; “summary administrative powers” had been unleashed. This was a reaction against an earlier, “everyday spectacle” of “law paralyzing administration. . . . Almost every important measure of police or administration [had] encountered an injunction.” Courts of equity even attempted to regulate grade crossings. These judges had been weighed down by “the old scholastic logic” and the “cumbrous, ineffective and unbusinesslike procedure” of their courts. For justice without law, the laity had turned to the executive. In 1907 Pound counted scores of statutes that gave “wide powers of dealing with the liberty or property of citizens to executive boards, to be exercised summarily, or upon such hearing as comports with lay notions of fair play”; ten years later he still saw “all manner of administrative tribunals, proceeding summarily upon principles yet to be defined” being created at the expense of the courts. “We seem for a time to be willing to throw over a large part of our hard won justice according to law,” Pound ventured, “in the hope that summary adjustment of human relations and summary administrative regulation of human conduct may give wider recognition and more effective security to the claims of the socially dependent to a larger and fuller life.”

Pound refused to join in such hyperbolic critics of administration as E.S.P. Haynes, who deplored The Decline of Liberty in England (1916), and William Guthrie, whose presidential address for the New York State Bar Association in 1924 was “a blast upon the trumpet to warn the people of the enemy that is upon our coasts.” The growth of administrative justice was not the product of “maternalism or paternalism, or a decay of the ancient faith, or a loss of fiber in the American public, or anything of that sort.” Yet it held perils for Anglo-American jurisprudence and required careful and determined efforts by the nation’s common lawyers.

A thoroughgoing advocate of administration might have overlooked or apologized for the crudeness of early independent commissions. “Lord knows I am pretty thoroughly aware of the dangers,” Felix Frankfurter wrote to his former roommate, the philosopher Morris Cohen, in 1914. “The biggest that I see is the inferior quality of men that we put on our commissions after such institutions become commonplace.” But commissions were still “in their pioneer stages”; they had “been at it all too short a time for us to get impatient with them.” The Interstate Commerce Commission, for example, showed that an agency could “be ‘mellowed by experience.’” Frankfurter thought that its efforts compared “very favorably in steadfastness, in dependability, in intellectual disinterestedness, with the work of any court dealing with a fluid branch of the law on such a multitudinous scale.”

Pound, in contrast, did not hesitate to reveal his impatience with the procedures and decisionmaking of administrative agencies. He called Local Government Board v. Arlidge (1915), in which the House of Lords upheld a refusal to disclose the report of a housing inspector declaring a building unfit for human habitation, “a startling decision in the cradle of our common law” and “a reversion to a primitive justice without law.” He wrote approvingly of judicial rebukes to public service commissioners who similarly acted upon secret reports. And to illustrate how administrative tribunals sought “only the line of least resistance” and to placate “immediate social interests” at the expense of “ultimate social interests and individual interests,” Pound provided his audiences with an ostensibly humorous rendition of Carroll v. Knickerbocker Ice Company (N.Y. 1916):

A few years ago an employee of the Knickerbocker Ice Company of New York came home one night in a very shaky condition, nervous, white in the face and shaky. His wife asked him what was the matter. He said that while they were putting ice in the basement of Hogan’s saloon, a three hundred pound block of ice fell on him, and he was very much shaken up. He did not get any better. His wife sent for a physician to whom he told the same story. They sent him to the hospital, where he died at one o’clock in the morning--of delirium tremens. His wife put in a claim for compensation before the Commission. The evidence there showed that during the day he had not been either upon the ice wagon or the water wagon. He was not on the outside laying in ice. He was on the inside of the saloon laying the foundation for the fatal attack that took him off that night. There was not an abrasion on his body. There wasn’t anything except his statement to his wife and to the doctor to show that there had been any accident. But the statute said that the Commission should not be governed by the technical rules of evidence, and it seemed to that Commission a technicality that there had to be any demonstration of connection between the employment and the injury. So in [a] laudable desire to distribute the economic surplus, the Commission held the Ice Company liable; and under the provisions of the statute it gave the New York Court of Appeals a great deal of trouble by a divided court to upset that award. Moreover, the court upset it under circumstances that will make it very easy to make such awards so that they will get by.

For Pound the case brought to mind a sixteenth-century sergeant-at-law’s protest against the equity jurisprudence of his day as contrary to the Law of God. “God had given us a certain law in the scripture,” the common lawyer had complained, “but the chancellor gave us no law anywhere.” The sergeant-at-law, Pound dryly observed, “would thoroughly understand a modern industrial commission.”

What, then, was to be done? Surely lawyers should avoid the example of the New York Court of Appeals in Ives v. South Buffalo Railroad Company (1911), which apparently considered the case’s “economic and sociological aspects . . . palpably irrelevant.” They should not simply “sound warning blasts and kick against the pricks.” Rather, “resolutely and intelligently,” they should use “the new economics and the social science of today” to renovate the common law. “We must have recourse to lawyers,” Pound declared, if “our crude experiments with lawless justice” were to give way to “a legal fixation and systematization.” Anticipating the argument of his Formative Era of American Law (1938), Pound announced that “the inventive, creative spirit of the founders of our American polity, of the great judges who made the feudal land law of England and a few institutions of the old law merchant into the law of nineteenth century America, is needed today. . . . It is for the lawyer to study the crudites and the defects that are involved in any evolution of this sort, to study the problems and the means of meeting them with the legal materials that are at hand, and to do the same job of creative, constructive, legal thinking and philosophic judicial decision that was done by Marshall and Kent, Story and Shaw, Gibson and Ruffin.”

As long as Pound thought the bar had enlisted in his cause he could regard the growth of administrative law with equanimity. When a series of events during the first years of Franklin D. Roosevelt’s administration convinced him that “the inner republic” of the bar was about to succumb to justice without law, he lost his balance. Before turning to those events, I’d like to take up a private exchange involving Morris Cohen, Felix Frankfurter and Pound in 1914 that vividly reveals Pound’s disdain for the lay administrator and the lay judge.