For years Douglas Linder, University of Missouri-Kansas City School of Law, has maintained an extraordinary website of materials relating to famous trials. Recently he has posted narratives for the trials of Leo Frank and O.J. Simpson. Here is his abstract for Frank's trial: 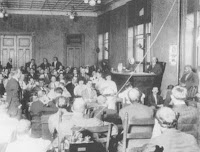 The discovery of the body of a thirteen-year-old girl in the basement of an Atlanta pencil factory where she had gone to collect her pay check shocked the citizens of that crime-ravaged southern city and roused its public officials to find a suspect and secure a conviction. Unfortunately, it now seems, events and the South's anti-Semitism conspired to lead to the conviction of the wrong man, the factory's Jewish superintendent, Leo Frank. The case ultimately drew the attention of the United States Supreme Court and the Governor of Georgia, but neither the Constitution nor a Governor's commutation could spare Frank a violent death at the end of rope strung from a Georgia oak tree.

Here is his abstract for Simpson's:

Although the 1995 criminal trial of O. J. Simpson for the murders of Nicole Brown Simpson and Ronald Goldman has been called a great trash novel come to life, no one can deny the pull it had on the American public. If the early reports of the murder of the wife of the ex-football-star-turned-sports-announcer hadn't caught people's full attention, Simpson's surreal Bronco ride on the day of his arrest certainly did - ninety-five million television viewers witnessed the slow police chase live. The 133 days of televised courtroom testimony turned countless viewers into Simpson trial junkies. Even foreign leaders such as Margaret Thatcher and Boris Yeltsin eagerly gossiped about the trial. When Yeltsin stepped off his plane to meet President Clinton, the first question he asked was, Do you think O. J. did it? When, at 10 a.m. PST on October 3, Judge Ito's clerk read the jury's verdict of Not Guilty, 91% of all persons viewing television were glued to the unfolding scene in the Los Angeles courtroom.