Ariela Gross's new book, What Blood Won't Tell: A History of Race on Trial in America, is reviewed by Laura Miller in Salon. Miller places the book in the 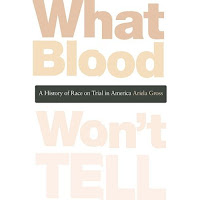 context of the election of the first bi-racial president of the United States. "The problem with race as Americans understand it," she writes,

is that it doesn't really exist. It is a brutal fact of life for millions of citizens, and an inescapable problem for the rest, but it is also, as Ariela J. Gross writes in her densely researched [new book], a "moving target," whose definition and meaning is always in flux. Many of us can avoid encountering this strange truth in the imprecise realms of cultural and social life, but when it comes to the law, imprecision just doesn't cut it. Gross' book, a history of cases in which people have challenged their official racial designation, eloquently demonstrates just how difficult it can be to say what race -- mine, yours, anybody's -- actually consists of....

In early America, as Gross tells it, African slaves, free people of color, white indentured servants (whose situation in many ways resembled that of slaves) and other people of varying statuses made up a workforce and a population that mingled freely with European settlers and Native Americans. "During the colonial era," she writes, "and even in the early republic, race had rarely provided the explicit justification for slavery. The founders of the republic perceived slavery as a necessary evil that they professed hope would wither away." The cotton gin, and with it the entrenchment of a plantation economy in the South, made slavery seem essential to landowners there, and for the indefinite future. As a result, Southerners developed "a race-based ideology" that declared enslavement to be a condition to which "negroes" (a relatively new concept that lumped together a whole slew of tribes and peoples) were supposed to be "uniquely suited" and in which no white person could rightfully be held.

Although "What Blood Won't Tell" also details the changing landscape of race for Indians, Asian immigrants, native Hawaiians, Filipinos and Mexican-Americans, to one degree or another the division between black and white has shaped the way Americans understand race in all its permutations.

Continue reading here.
Posted by Mary L. Dudziak at 10:15 AM