Eloquence and Reason: Creating a First Amendment Culture by Robert L. Tsai, American University, Washington College of Law has just been published by 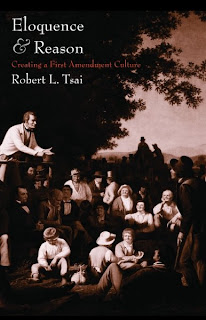 Yale University Press. I can attest that readers will find much eloquence and reason in this beautifully crafted book. Tsai has posted the Table of Contents and Preface on SSRN. Here's the abstract:

This book presents a general theory to explain how the words in the Constitution become culturally salient ideas, inscribed in the habits and outlooks of ordinary Americans. "Eloquence and Reason" employs the First Amendment as a case study to illustrate that liberty is not an end state but a state of mind achieved through the formation of a common language and a set of organizing beliefs. The book proceeds to explicate the structure of First Amendment language as a distinctive discourse and illustrates how activists, lawyers, and even presidents help to sustain our First Amendment belief system. When significant changes to constitutional law occur, they are better understood as the results of broader linguistic transformations. The book concludes by positing a model of judicial review in which jurists are responsible for the management of prevailing political discourses, quite apart from any obligations they may have to substantive conceptions of the good. The Table of Contents and and Preface are available for download.

“Just when I thought that there was nothing new to say about the First Amendment, Robert Tsai comes along and writes a book which encourages me to think again.”—Bruce Ackerman, Sterling Professor of Law and Political Science, Yale University

"A provocative meditation on the ways the metaphors used in constitutional doctrine empower, limit, create, and recreate the public over which the written Constitution is said to assert authority. Intriguing case studies arise from the civil rights movement of the 1960s, the Christian Right of the 1980s, and the attacks on Jehovah's Witnesses in the 1940s."—Mark V. Tushnet, William Nelson Cromwell Professor of Law, Harvard Law School, and author of The NAACP's Legal Strategy Against Segregated Education, 1925-1950

"Tsai's exciting work on the interplay between the Supreme Court and the executive branch in the nineteen forties sheds new light on the origins of modern constitutional law. And his new account of the relationship between language and power in political discourse is sure to be controversial and should be widely read."—H. Jefferson Powell, Duke Law School