One of the big new books to look for is Thomas Sugrue, Sweet Land of Liberty: The Forgotten Struggle for Civil Rights in the North, just out this week from Random House. My copy is still on its way in the mail, but the advance reviews, and Tom's prepub 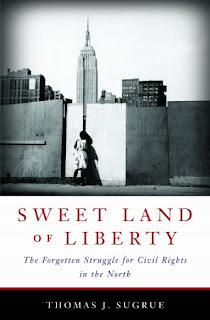 lication talks on this project promise a blockbuster that does more than take the movement north. It also aims to question widely-held assumptions about civil rights history.

Sweet Land of Liberty is taken up in a review by Alan Wolfe in today's New York Times. "Sugrue’s long and exhaustively researched book brings [the northern] movement back to life," he writes.

Inspired by Gunnar Myrdal’s “American Dilemma,” and led primarily by preachers, the Southern movement had been moral in tone: blacks should strive to lift themselves up, and whites should aim to live up to American ideals of freedom and equality.

Such an approach, Sugrue argues, was inappropriate for the North. For one thing, Northern whites were persuaded that so long as they avoided explicitly segregationist laws, their consciences were clean. For another, racial progress in the North was so slow that more dramatic steps were required than nonviolent protest or high-minded sermons. Sugrue says that only through actions threatening the privileges of whites — boycotts, demonstrations, community control of schools — could blacks narrow the disparities.

While he found the narrative moving, Wolfe prefers the moralism of the Southern movement, and he quarrels with Sugrue's focus on some activists that Wolfe characterizes as "crackpots." The reviewer also wishes less space had been devoted to the movement's engagement with global issues, though contemporary historians will especially value that perspective.
There is more to say about this promising new book, and we'll keep an eye out for more in the book pages. The rest of today's review is here. The first chapter of Sweet Land of Liberty is here.
Posted by Mary L. Dudziak at 12:01 AM