New reviews: books on the history of state secrets, Calvinism at the American founding, Lincoln & Darwin

Government secrecy is the theme of a Gary Wills essay in the New York Review of Books, taking up In the Name of National Security: Unchecked Presidential Power and the Reynolds Case by Louis Fisher, and Claim of Privilege: A Mysterious Plane Cr

ash, a Landmark Supreme Court Case, and the Rise of State Secrets by Barry Siegel. Wills finds both books to be "outstanding." He writes, "The take they have to tell is a disheartening one, of government lying and the willingness of courts to accept it." In discussing the books, Wills' essay describes U.S. v. Reynolds (1953), the landmark state secrets case, and the Vinson and Rehnquist Courts, finding Reynolds

one part of...a larger picture of executive usurpation that has sealed off the presidency behind walls of secrecy, unaccountability, and extreme legal theories of detention, torture, defiance of Congress, and spying on citizens.. It is as part of that larger scene that U.S. v. Reynolds remains important....If the constitutional imbalance created by the present administration is ever to be remedied, the true story of the Reynolds decision must be part of the assessment leading to a cure.

According to Witte, Reformed Protestants developed a biblically based theory of social contract (or "covenant"), together with ideas of popular sovereignty, fundamental rights, and the legitimacy of revolution, more than 100 years before Locke. Witte offers the essential scholarly caveats—Calvinism was not the only source of ideas of political freedom; when Calvinists were in power they did not always extend the benefits of freedom to others—but fundamentally, he presents the claim that Reformed Protestantism was the "seedbed" of American constitutionalism: "American religious, ecclesiastical, associational, and political liberty were grounded in fundamental Puritan ideas of conscience, confession, community, and commonwealth." In fact, as he points out, "every one of the guarantees in the 1791 Bill of Rights had already been formulated in the prior two centuries," along with "a number of the core ideas of American constitutionalism—popular sovereignty, federalism, separation of powers, checks and balances, church and state, and more" by "Calvinist theologians and jurists."

This is the weekend for birthday book round-ups, with the 200th anniversary of the birth of both Abraham Lincoln and Charles Darwin on February 12. 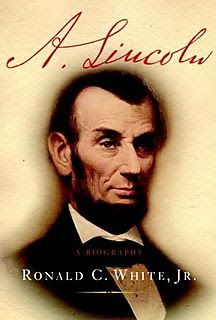 David W. Blight takes up A. LINCOLN: A Biography by Ronald C. White Jr. on the cover of the Washington Post Book World. White presents Lincoln as a man who craved books, including Blackstone's Commentaries. According to Blight:

White does not portray a genius who seemed to figure out all things before other mortals. Rather, this is a Lincoln of self-doubt, an evolving personality and an emerging and curious mind. This is a Lincoln of growth from backwoods ignorance to Enlightenment thinker, from prejudice and caution to boldness and imagination. This is a Lincoln, White writes, on a "journey of self-discovery" to the very end of his life. As Douglass poignantly said, Lincoln "began by playing Pharaoh [but] ended by playing Moses."

Blight suggests that this "thoroughly researched book belongs on the A-list of major biographies" of Lincoln.
More Lincoln book can be found in the Washington Post. Lincoln book round-ups appear in the New York Times and the San Francisco Chronicle. For a Darwin round-up, see the Los Angeles Times.
Posted by Mary L. Dudziak at 9:38 AM