Digital cameras have completely revolutionized archival research. Whereas before one had to sit in the archive, read each document, and copy them out by hand, now one could--in principle--breeze in, shoot a bunch of pictures, and leave, working on the results 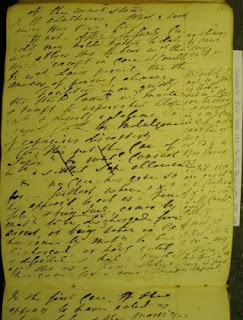 elsewhere. Putting on hold for a moment whether that is such a great idea, I want to share a little trick I use when taking pictures. Rather than depend on notes about what I shoot, labeling the image files later, or hoping I remember what they are, I insert a small tag into each picture identifying the archive, shelfmark, folio number, document date, or any other relevant information. I have posted two examples. In one, the tag is on the document, and in the other it is alongside the document. The biggest problem I have with putting the tags on the documents is that I have to be careful they don't 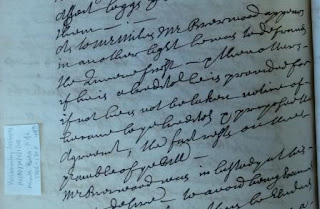 cast a shadow that obscures text. The biggest problem with putting them under the document is that the camera angle might be such that the tag itself gets obscured, as you can see from the example. To prevent that inevitably means taking the picture from a greater distance. Also, because the tag has to be written in pencil--since I don't write them ahead of time--it sometimes doesn't show up as well in the photo. I've never actually had a situation where it was unreadable, but that is possible. This system lets me be lazy about labeling my image files, because I know that the label is built into the picture.

The other problems with digital cameras are technical. The Sonys I tried would always blur slightly around the edges. My current Lumix struggles with the anti-shake in low light. Here is what I have figured out through painful trial and error. First, the camera has to have image stabilization, unless you can use a tripod. Second, maybe this is purely personal, but I prefer a lighter camera. My hands get fatigued after shooting continuously for a few minutes, and the more they shake, the less the camera can compensate. For this reason, I have stayed away from top of the line SLR or SLR-like cameras. Third, the camera needs to be able to deal with low light situations without forcing one to use a high ISO and thereby increasing the noise. Fourth, the camera has to have good battery life. Always bring the charger or spare batteries with you to the archive. Fifth, take a representative kind of document along when buying a camera, shoot some pictures, and study the sharpness along the edges. If the text is already difficult to read, any additional distortion can be fatal. Sixth, no matter how reliable the camera, I've started taking at least two shots of every document. I can cull out the duplicates later. That is faster, and seems to use less battery power, than stopping after every shot and zooming in on the image. Of course, this also means that you need a large memory card. Finally, when shooting consecutive pages in a bound text, I like to get a piece of the opposite page in the frame. Sometimes the texts I see are only numbered on every other page or only on one side. Sometimes page numbers end up being hard to read. By getting a piece of the opposite page, I can match up pictures and be more sure which page is which or that I haven't skipped a page. I also pay attention to getting a shot with the page number in it. I might also take another close-up without. If the document is large, I take both a full page shot and a top-part and bottom-part shot, being sure that I overlap some lines in the middle.

Now to the policy of using cameras as Sitzfleisch substitutes. Sometimes it is the best use of one's time to shoot pictures and move on. In that case, I at least recommend uploading the pictures to your computer before leaving the archive to make sure you have good shots. I've done the quick-shoot thing, among other times, when all I wanted was some examples of the handwriting of a certain type of text that I planned to work on in the future. But at a minimum, I think it is a good idea to at least skim the document in situ. Not only does that prevent one from taking pictures of a lot of garbage, but if the document does end up being somewhat blurry, at least you know what the document was about, and that might help you figure out what it says. I also find it helpful to note down that I took pictures. So if I am taking notes about a document, and I take a picture of it, I add in my notes: "picture taken." Three other tips I've learned from bad experiences: before deleting photos from the camera, make sure they were all properly loaded onto the computer. When culling photos, make sure you delete the bad image, not the good one. And finally, take more pictures rather than less. I am endlessly kicking myself for not having taken that one additional picture. At the time, I thought it wasn't important. It then turns out that it was.

I am always looking for a better archive camera, and I've never found a discussion of the topic online. So if anyone has suggestions, I, for one, would be very happy to hear them.
Posted by Emily Kadens at 7:38 PM