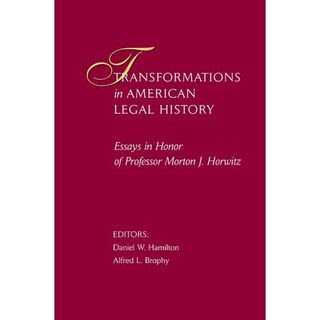 This book is the first of two planned festschrift volumes in honor of the legal historian Morton Horwitz, who has been teaching at Harvard Law School since 1970. Horwitz’s most well known books are both called THE TRANSFORMATION OF AMERICAN LAW (Horwitz 1977 and 1992), which explains the title of this volume. Seventeen of the eighteen contributors are former students who are now law professors or historians themselves. The eighteenth is Horwitz’s longtime colleague Charles Donahue. As is often true in collections like these, there is no common theme to the chapters. Most of the authors have contributed substantive historical essays within their various fields of expertise. The exceptions are William Treanor and Daniel Hamilton, who offer short appreciations of Horwitz himself, and Donahue, who appraises the state of legal history generally. The authors of the substantive historical pieces make varying degrees of effort to connect their work to Horwitz. On one end of the spectrum, Daniel Hulsebosch prefaces his discussion of the early American judges James Kent and Joseph Story with a few pages analyzing what Horwitz had to say about them, and Assaf Likhovski frames his research in the law of British Palestine as “Horwitzian journeys.” On the other end, a few of the authors do not mention Horwitz at all.

Some of the essays suggest the influence of Horwitz’s own work. Polly Price’s chapter on “Stability and Change in Antebellum Property Law” is reminiscent of Horwitz’s first Transformation book, both in its subject and in the way Price amasses early reported court opinions to build up a sense of what judges believed they were doing. Dalia Tsuk’s essay on “Pluralism, Individualism, and Democracy” in the twentieth century recalls Horwitz’s second Transformation book, which was more of a high-level intellectual history of legal thought. But the chapters are in a wide variety of styles, most of which are very different from Horwitz’s. Stephen Siegel traces the doctrinal origins of “strict scrutiny,” an important concept in constitutional law in the second half of the twentieth century. Alfred Brophy examines the role of utilitarian thinking in debates over the Fugitive Slave Act of 1850. Elizabeth Blackmar contributes a history of the “free rider,” who has played a leading role in the economic analysis of law. Gregory Mark offers what he calls a “speculative essay” on the shifting purposes served by the limited liability of corporate shareholders. Mary Bilder and Alison LaCroix each explore the colonial origins of different aspects of early republican constitutionalism. It is hard to draw any conclusion from these diverse essays, other than that Horwitz’s former students evidently do not [*503] constitute any particular school. They span the full range of approaches to legal history.

Banner notes that "as with many festschriften, most of the chapters read like small parts of larger works in progress or already published. The contributors are all very good at what they do, so the essays are all interesting and well crafted, but few would likely have been published on their own." Still, he writes, "all of these essays are worth reading."
Banner also comments on the genre of the festschrift, which will be the topic of a separate post. The full review is here.
Posted by Mary L. Dudziak at 7:54 AM