Needing a break from another piece of my war project, I turned to archival research this week, and I stumbled upon an unlikely interchange. I was looking for records from Felix Frankfurter's service in the U.S. Army JAG Corps, as a window into his thinking on war and security. I found nothing on this in Frankfurter's World War I era War Departmen 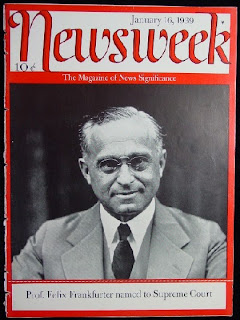 t files. But then, in his correspondence with Franklin Delano Roosevelt, I came across Frankfurter's resignation from the Corps. Or, at least, his attempt. The letter was sent shortly after Frankfurter joined the Supreme Court.

Dear C-i-C:
Inter leges arma silent was not a maxim of the hard-headed Romans. Nevertheless, under the circumstances, it is, I suppose, sensible for me to lay down my paper arms by resigning my commission as a Major in the Reserve Corps.
There is probably some official in the War Department to whom I might appropriately make this martial communication, but I should like to salute once more my Commander-in-Chief before Senator Nye takes away his constitutional powers!
With great respect, I am, Sir,

My dear Major Frankfurter --
Your effort to retire from the United States Army at this time of crisis has been rejected.
If instead of consulting the words of Cicero (a mere talker) to find the motto "inter leges arma silent", you had consulted the famous phrase of Major General Ceasar (a doer), "leges impellent arma", i.e., laws make for war -- you would see that it is more essential than ever that you remain in the Army....
I regret that it is impossible at this moment to consider you for promotion to the rank of Lieutenant Colonel. I am informed that this will depend somewhat on your conduct during the next few years....
With great respect, I am, Sir.
(signed) Franklin D. Roosevelt
Commander-in-Chief
More to come!
Photo credits: Frankfurter, FDR.
Posted by Mary L. Dudziak at 6:00 AM