[Every year, in a class on Washington lawyers, I assign some congressional testimony Thurman Arnold gave at a hearing presided over by two liberal senators, the economist Paul Douglas and the former law professor Wayne Morse, on a proposed code of ethics for government officials. (“Establishment of a Commission on Ethics in Government,” Special Subcommittee of the Committee on Labor and Public Welfare, U.S. Senate, 82d Cong., 1st Sess., July 6, 1951, 371-87.) It’s an interesting exchange, as Arnold is characteristically deadpan in his attack on the code, forthrightly defends the revolving door, and acknowledges that he now would prefer stricter judicial review of agency decisions than the New Dealers sought before the war. As well, Douglas gets off a nice joke about the acquisitiveness of lawyers.

This year I ran out of time before I could read one of my favorite Arnold witticisms, which bears out Laura Kalman’s claim that his “tongue was glued to the inside of his cheek.” The document is a letter, dated October 10, 1936, to William O. Douglas (left), formerly his confederate in alcohol-fueled hi-jinks on the Yale law faculty but at the time a member of the Securities and Exchange Commission. Douglas must have recruited Arnold to serve as trial examiner in a proceeding against the White-Weld firm in the SEC's bid to outlaw wash sales. When he wrote the letter, Arnold had taken the testimony but would soon owe the SEC his intermediate report.

Charles E. Clark was dean of the Yale Law School; Charles U. Samenow, a researcher who was, according to John Henry Schlegel, "absolutely essential" to the success of Clark’s studies of civil courts.]

[T]he briefs in the White-Weld case will be due on the 15th, so that I can start to work on my opinion, on which the Commission has given me two weeks.

I have a case to argue in the Supreme Court which comes up some time during the week of October 19 and probably have to go to San Francisco the next week on a case in the Circuit Court of Appeals there. Preparation of these cases is rushing me considerably. My mind is fairly clear as to what an opinion in the White-Weld case should contain. However, I am not reaching my final conclusion until I have seen the briefs. The job of analyzing the testimony and checking up on the briefs is considerable because of the size of the record. I am going to have to work on this evenings and the Commission is not paying me any per diem. Therefore, I wonder if the suggestion that the Commission give me some help in analyzing this enormous record is not a proper one. It is one thing to make up your mind generally on testimony and another to check up on pages and exhibits. 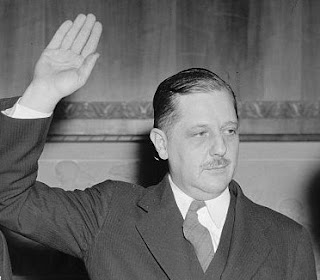 I approach you with deference and fear and trembling on this matter due to your exalted position as Commissioner. I recognize the high official circle in which you move and therefore do not wish to take advantage of the old days when I protected you from Charlie Clark and Samenow and kept them from firing you. I would not for the world mention the fact that in the days when I was an important factor at Yale and you were nothing but a cog my intervention at crucial times saved the Douglas family from being thrown out in the cold and being forced to go on the relief rolls. These considerations are emphatically not the basis of the present cry for help. I only want you to consider the merits of my application just as though you were not under such a heavy obligation to me for standing between you and your family and the ax of one Charles E. Clark.

If you feel that you must turn this down, my own hope is that you will be able to sleep nights afterwards and not toss and toss and toss on account of the gnawing of a guilty conscience.

Thurman W. Arnold
Posted by Dan Ernst at 1:07 AM