Tyson's "Blood Done Sign My Name" on the Big Screen 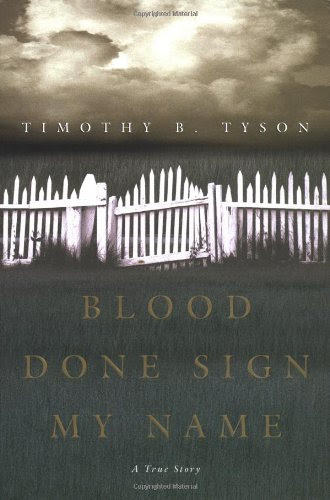 High on my list of "beautiful books" is Timothy Tyson's Blood Done Sign My Name. I first encountered Tyson's work when I read Radio Free Dixie, a biography of Robert F. Williams and an incisive study of the roots of black power. Blood Done Sign My Name is a different type of book, both a memoir and a deeply researched account of the way a racially motivated murder shook up Tyson's small North Carolina town.150 years earlier, the legal process might have "kept the peace," to borrow Laura Edwards' phrase, but this trial disturbed it. After an all-white jury acquitted the white defendants (one of whom was the father of Tyson's boyhood friend), some residents rioted and protested. Others clung more fiercely to segregation. Tyson's father, a Methodist pastor and self-proclaimed "Eleanor Roosevelt liberal," attempted to bridge racial divides (and was thereafter encouraged to relocate). Surprisingly to many readers, this all took place in 1970, after civil rights activists had fought and won many battles.

I recently learned that a film adaptation was released earlier this year. I haven't seen it yet, but I wanted to use the opportunity to recommend the book. Although we are living through a memoir boom, it is rare to see a professional historian -- particularly a relatively junior one -- taking on a project that mixes personal history and scholarly ambition. It is rarer still to see such an endeavor turn out well. (To paraphrase New York Times critic William Grimes, we all have a life; we needn't all write about it.)

For those who like books that combine personal history and serious scholarship, I also recommend Kenji Yoshino's Covering: The Hidden Assault on Our Civil Rights. It's a slim book that blends anecdotes from Yoshino's life as a gay, Japanese-American legal scholar with arguments about how U.S. law could better address inequality.

images: Cover, Tyson
Posted by Karen Tani at 5:00 AM