[As long-time readers may recall, I've sometimes posted here the biographical "issue-spotter" from my legal history exam. The subject for last May's exam was Ida Klaus. She deserves a much fuller treatment than I provide below. For example, this sketch does not address her anticommunism at the National Labor Relations Board in the 1930s, nor does it draw upon Klaus's papers at the Tamiment Library at NYU, which, a hasty search last May suggested, are from her later years as a labor arbitrator in New York City. It does draw upon three fascinating oral histories, at the New York Public Library, Cornell's School of Industrial and Labor Relations, and Columbia University. Thanks to Barbara Aronstein Black for acquiring and passing on to me much information about this most esteemed alumna of the Columbia Law School.] 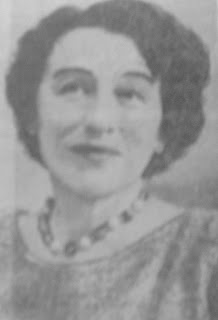 Ida Klaus (1905-1999) was born in Brooklyn, New York, to Jewish immigrants from different parts of Eastern Europe. Her well-to-do father died of leukemia six months after her birth, leaving an estate administered by his brothers, who (in Klaus's recollection) were unreasonably stingy in doling it out. Her mother soon remarried, to a very devout but quite impecunious rabbinical scholar. Yiddish, as well as English, was spoken in the home. She learned Hebrew at a very early age and attended religious as well as public schools. In both she was a precocious learner and had strong personal reactions to the historical and religious figures she encountered. A favorite biblical figure was Deborah, because “she was treated as a man would be treated, for her heroism and her wisdom. She went out into battle.” Klaus was just as strong-willed. At one Passover Seder, at the age of ten, she refused to bring a pitcher of water so that the menfolk could wash their hands, a customary duty of a daughter in the house. “I am a girl, not a servant,” she announced. Her beloved grandfather backed her up, and everyone went off to the kitchen to wash up in the sink.

Klaus started teaching Hebrew in her mid-teens and attended the Teacher’s Institute of the Jewish Theological Seminary, graduating in 1925. She taught Hebrew school while attending Hunter College, but still managed to graduate in 1927 with a good record. Meanwhile, her older brother Sam, who, like Ida, never married, attended the Columbia Law School. In 1927, he graduated first in his class.

Intending to pursue a legal career in juvenile justice Klaus applied to Columbia Law School in 1927. At that point the faculty only grudgingly admitted female students with a graduate degree from Columbia, although a lone graduate of Barnard (Columbia’s sister school) had also made it in. In 1928, the faculty opened the class to female graduates of any college who scored high enough on an entrance exam. Klaus, with five other women, entered as part of the first real class of female Columbia law students. She became friends with Walter Gellhorn and a few other men. Other classmates were not as welcoming. “In some classes,” she recalled, “the men would stomp their feet so that we could not be heard.” In part because she continued to teach Hebrew, she missed making law review by three of four places, but she managed to impress her teachers nonetheless. One was Herman Oliphant, a legal realist who taught her contracts.

Klaus graduated with letters of introduction from her professors to a few law firms, but none would hire a woman. She was considering how to find a position with the juvenile court when she received an unexpected offer from Oliphant, who had left Columbia to found an Institute for the Study of Law at Johns Hopkins University. In a satellite office in New York City, she directed research on the cost of civil justice. After only two years, financial exigency forced Johns Hopkins to shut down the Institute, but Klaus continued as a researcher when another group agreed to sponsor her project.

In September 1933, she reunited with Oliphant as the only woman on the small, select and young legal staff of the new Farm Credit Administration (FCA) in Washington, D.C., where Oliphant was general counsel. “It was probably one of the greatest experiences of my life, to work with these very bright people . . . in the excitement and headiness of the New Deal,” she recalled. “I never felt inadequate when I worked with [Oliphant],” she added. “He had a way of instilling confidence in me.”

The arrangement lasted only a few months, however. The FCA was headed by FDR’s neighbor, Henry Morgenthau, Jr. When illness forced the resignation of Roosevelt’s first Treasury Secretary, FDR gave the job to Morgenthau. Oliphant became general counsel of the Treasury but did not take Klaus with him. The FCA’s new general counsel found Klaus to be “a young lady possessing an exceptionally keen intellect and most agreeable personality and charm,” but the agency’s legal work had become routine. Klaus grew bored and asked for permission to find a new post.

Ida’s brother Sam (who worked elsewhere in the New Deal) mentioned Ida to Jerome Frank, and in November 1934 Frank offered her a job at AAA. The FCA’s general counsel happily gave her up. “I feel that all brain power available to the Government should be utilized to its best advantage,” he told Frank. “A lawyer of Miss Klaus’ talents can be of the greatest service in pioneering work.” Frank was thrilled to have her, even though, as he told Klaus, under an informal understanding he had with administrators at Agriculture, it meant that he had to hire “two non-Jews.”

The AAA purge left Klaus “high and dry.” When the National Labor Relations Board survived a constitutional challenge in 1937, she moved, with Oliphant’s and Frank’s help, to the NLRB’s rapidly growing staff. Its general counsel refused her request to become a trial attorney. “A lady trial lawyer?” he replied in disbelief. Instead he relegated her to the Review Division, where with 100 other lawyers (including several women) she prepared the equivalent of bench memos on the lengthy records produced by trial examiners. “You worked all the time, as long as you could,” she recalled. The young married men “worked as hard as the rest of us.” She became a supervisor in the Review Division and, later, the Enforcement Division, in which capacity she finally argued cases in federal court.

The Taft-Hartley Act of 1947 altered the structure of the NLRB, so that the general counsel ran the “prosecutorial” staff and the Board simply heard the cases the general counsel chose to bring before it. In 1948 Klaus became the Board’s first solicitor. After her appointment, one Board member, “a dear friend,” explained that although he was glad she had been chosen he had voted against her, because he feared a backlash from Congress if “a woman and a Jew” got the job.

In 1954 Klaus left the NLRB over differences with the Republican administration and set her sights on becoming the chief labor advisor of New York City’s mayor. When the mayor asked her whom she “knew,” Klaus gave the names of leading lawyers and labor relations experts. The mayor replied, “Well, those are fine names. See if you can’t think of somebody else.” Only then did she realize that he wanted her to name some notable local politician. “I was very naive about politics in those days,” she recalled. “I had been completely sheltered from it in Washington.” Ultimately, she landed the job and spent the rest of her career handling labor matters for various branches of New York City’s government.