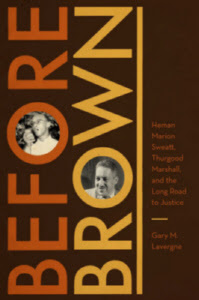 Thomas D. Russell, University of Denver Sturm College of Law, has just posted a review of Gary M. Lavergne, Before Brown: Heman Marion Sweatt, Thurgood Marshall, and the Long Road to Justice (University of Texas Press, 2010), which appeared in the Austin American-Statesman, October 17, 2010.  Here's the abstract:


“Before Brown: Heman Marion Sweatt, Thurgood Marshall, and the Long Road to Justice” is Gary Lavergne’s treatment of Sweatt v. Painter, an important 1950 Supreme Court decision on the way to Brown. Lavergne, director of admissions research at the University of Texas, tells an interesting and important story that fills many gaps between Plessy and Brown.

In the review, Russell writes:


Lavergneʼs at his best placing Sweattʼs struggle within the political split among African-Americans. Marshall, the NAACP, and eventually Sweatt believed that separate could never be equal. Lavergne recounts the acrid correspondence between Marshall and Carter Wesley, the owner/editor of the Houston Informer. Wesley favored equalization of existing and new African-American institutions. In 1947, more than 60 percent of Texasʼ African-Americans favored the creation of a black university over the desegregation of UT. Navigating this rift challenged the NAACPʼs lawyers.