Fortunate is the legal history society that can have launches for two strong books on the same night. According to Christopher Moore's History News, that's what the Osgoode Society for Canadian Legal History managed on Thursday.

The first book is Work on Trial: Canadian Labour Law Struggles, a collection of essays edited by Judy Fudge and Eric Tucker. Its publisher writes: 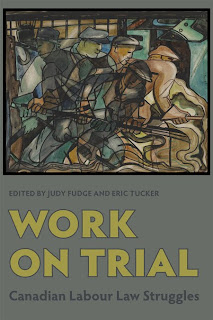 Work on Trial is a collection of studies of eleven major cases and events that have helped to shape the legal landscape of work in Canada. While most of the cases are well-known because of the impact they have had on collective bargaining, individual employment law, or human rights, less is known about the social and political contexts in which the cases arose, the backgrounds and personalities of the judges and the litigants, the legal manoeuvres that were employed, or the ultimate fate of all those who were involved. These studies, written by some of Canada’s leading labour and legal historians, provide this context. Beginning with Toronto Electric Commissioners v. Snider, one of the earliest and most important cases involving the division of powers in the Canadian federation, to the events leading to the articulation of the “Rand Formula” in the immediate post Second World War period, and on to the struggles of women workers in the late 20th century in challenging the continuing employment practices based on hegemonic gender-based assumptions, each study tells a compelling story, rich in detail and full of perceptive insights into the complex relationship between law and work.

The second book is Race on Trial: Black Defendants in Ontario's Criminal Courts, 1858-1958, by Barrington Walker, an associate professor in the Department of History at Queen's University. The publisher explains: 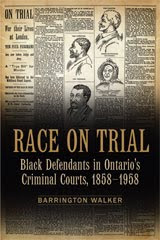 While slavery in Canada was abolished in 1834, discrimination remained. Race on Trial contrasts formal legal equality with pervasive patterns of social, legal, and attitudinal inequality in Ontario by documenting the history of black Ontarians who appeared before the criminal courts from the mid-nineteenth to the mid-twentieth centuries.

Using capital case files and the assize records for Kent and Essex counties, areas that had significant black populations because they were termini for the Underground Railroad, Barrington Walker investigates the limits of freedom for Ontario's African Canadians. Through court transcripts, depositions, jail records, Judge's Bench Books, newspapers, and government correspondence, Walker identifies trends in charges and convictions in the Black population. This exploration of the complex and often contradictory web of racial attitudes and the values of white legal elites not only exposes how blackness was articulated in Canadian law but also offers a rare glimpse of black life as experienced in Canada's past.