Perlin on The Impeachment of Samuel Chase

The Impeachment of Samuel Chase: Redefining Judicial Independence is a new article by Adam A. Perlin.  It appears in the Rutgers Law Review (2010).  Here's the abstract: 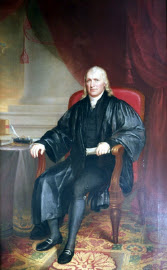 This article hopes to make the following contributions to the existing academic scholarship:

First, some legal scholars have ignored how the impeachment contributed to the modern apolitical judiciary or have construed its contribution too narrowly. This article provides a fuller explanation of the impeachment’s contributions to our modern understanding of judicial independence and what properly constitutes an impeachable offense.

Third, this article fills a void in the academic literature, as there are almost no articles fully addressing the “story” of Chase’s impeachment and even fewer which analyze the importance of the debates in the House of Representatives and the examination of the trial witnesses.

Given the increasing attention devoted to judicial activism and persistent calls for the impeachment of federal judges, the lessons of the Chase impeachment are perhaps more relevant today than ever before. By addressing the issues mentioned above, this article endeavors to draw greater attention to a major event in American legal history and to give a turning point in the history of impeachment and the judicial branch the attention it deserves.