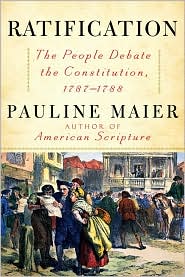 Our friends at H-Law have posted a review of Pauline Maier, Ratification: The People Debate the Constitution, 1787-1788 (Simon & Schuster, 2010).

On February 6, 1788, in a major speech during the concluding session of the Massachusetts ratifying convention, Governor John Hancock noted that “[t]he people of this Commonwealth” are a people “of great intelligence in public business” (p. 206). Hancock’s shrewd compliment applies not only to the people of Massachusetts but to the people of the United States during the great national discussion whether they should adopt or reject the proposed Constitution of the United States. The ratification controversy, both its formal institutions and processes and its informal process of debate and disputation, continues to show the American people at their political and principled best (and, occasionally, at their factional worst). Oddly, despite its intrinsic interest and its remarkable drama and excitement, never until now has the ratification of the Constitution received the comprehensive historical treatment that it deserves. The book under review--large, entertaining, rigorously argued, and formidably researched--does just that. Ten years in the making, it was worth the wait.

The review goes on to place Ratification in the context of Maier's previous scholarship, to give the reader a sense of the book's coverage (Bernstein calls it "truly comprehensive"), and to note the significant research obstacles that Maier overcame.

Bernstein concludes by identifying Ratification as "one of the two starting-points for future historians of the adoption of the Constitution" (the other being The Documentary History of the Ratification of the Constitution and the Bill of Rights, 1787-1791). He devotes the rest of the review to outlining four lines of inquiry and analysis that future scholars may wish to pursue.

You can find another review, by David Sehat (Georgia State University), at the Intellectual History Blog, here.
Posted by Karen Tani at 4:00 AM