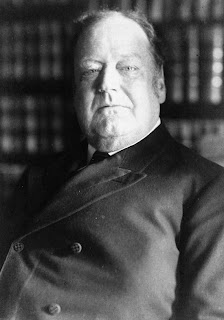 Those interested in representations of U.S. Supreme Court justices in popular culture might want to know of “Father Chief Justice: Edward Douglass White and the Constitution,” a play by Paul R. Baier, Professor of Law, Paul M. Hebert Law Center, Louisiana State University, which, thanks to the Law Library of Congress, will be previewed on Tuesday, March 8, 2011, from 2 to 3:30 pm, in the Coolidge Auditorium, Jefferson Building, Library of Congress, 101 Independence Ave SE, Washington, DC 20540. RSVP to tada@loc.gov or call Tynesha Adams at 202-707-5065.

An announcement of the event invites you to “Come experience a veritable New Orleans style jazz funeral depicting Captain Oliver Wendell Holmes, Jr. facing death in the Valley of Antietam, Justice Holmes sitting in his living room on Constitution Day, [and] Chief Justice White’s “Voice of the Fireside” at the Willard Hotel.” In addition, “playwright and law professor Paul R. Baier takes you behind the scenes in the role of Professor Richard Henry Jesse, a close friend of Chief Justice White.”

Image credit
Posted by Dan Ernst at 12:35 AM