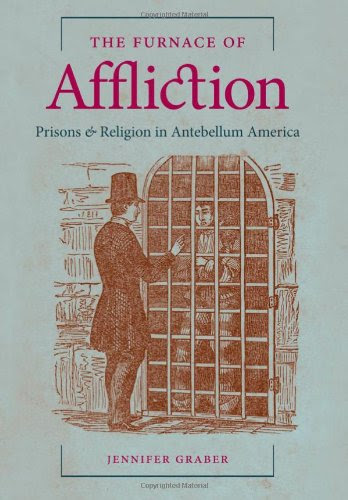 New from UNC Press is The Furnace of Affliction: Prisons and Religion in Antebellum America, by Jennifer Graber (College of Wooster).

Focusing on the intersection of Christianity and politics in the American penitentiary system, Jennifer Graber explores evangelical Protestants' efforts to make religion central to emerging practices and philosophies of prison discipline from the 1790s through the 1850s.

Initially, state and prison officials welcomed Protestant reformers' and ministers' recommendations, particularly their ideas about inmate suffering and redemption. Over time, however, officials proved less receptive to the reformers' activities, and inmates also opposed them. Ensuing debates between reformers, officials, and inmates revealed deep disagreements over religion's place in prisons and in the wider public sphere as the separation of church and state took hold and the nation's religious environment became more diverse and competitive. Examining the innovative New York prison system, Graber shows how Protestant reformers failed to realize their dreams of large-scale inmate conversion or of prisons that reflected their values. To keep a foothold in prisons, reformers were forced to relinquish their Protestant terminology and practices and instead to adopt secular ideas about American morals, virtues, and citizenship. Graber argues that, by revising their original understanding of prisoner suffering and redemption, reformers learned to see inmates' afflictions not as a necessary prelude to a sinner's experience of grace but as the required punishment for breaking the new nation's laws.

"Jennifer Graber's provocative, important, and thoughtful book illuminates the history of the intersection of religious beliefs and practices with the U.S. penitentiary. Her work will become the leading account of that troubled relationship."
--Michael Meranze, University of California, Los Angeles

"Stated simply, Jennifer Graber has given us the most sophisticated and comprehensive history of prisons and religion in early America that has ever been written. Eloquent, powerful, and riveting, The Furnace of Affliction is required reading for anyone who wishes to understand the painful history of prisons and incarceration in the early republic."
--Harry S. Stout, Yale University

The Historical Society has also posted on the book. You can find Randall Stephens's interview with Graber here.

Image credit
Posted by Karen Tani at 5:00 AM