Common Law, History, and Democracy in America, 1790-1900: Legal Thought before Modernism by Kunal Parker has just been published by Cambridge University Press.  Here's the book description: 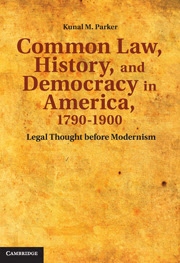 This book argues for a change in our understanding of the relationships among law, politics, and history. Since the turn of the nineteenth century, a certain anti-foundational conception of history has served to undermine law's foundations, such that we tend to think of law as nothing other than a species of politics. Thus viewed, the activity of unelected, common law judges appears to be an encroachment on the space of democracy. However, Kunal M. Parker shows that the world of the nineteenth century looked rather different. Democracy was itself constrained by a sense that history possessed a logic, meaning, and direction that democracy could not contravene. In such a world, far from law being seen in opposition to democracy, it was possible to argue that law - specifically, the common law - did a better job than democracy of guiding America along history's path.


"This is a wide-ranging and highly original treatment of law and history in nineteenth-century America. Parker incorporates into his story many new texts that have not been examined in this context before and re-examines familiar texts with a fresh eye and novel interpretations. Common Law, History, and Democracy in America, 1790-1900, is an illuminating and insightful work, offering an important contribution to the growing literature on historically and socially minded jurisprudence." - Robert Gordon, Yale Law School

"Parker has written an original and stimulating work of intellectual history. By insightfully analyzing how different historical sensibilities and temporalities interacted in nineteenth-century America, he succeeds in revising not only the standard narrative of American legal history, but also our understanding of nineteenth-century historical consciousness." - Dorothy Ross, Arthur O. Lovejoy Professor Emerita of History, Johns Hopkins University

The table of contents and more info is here.   The press, unfortunately, has set the price quite high, so you should nudge your library to make sure they purchase a copy.  With library budget cutbacks, don't assume your library will have a copy unless they hear from you.
Posted by Mary L. Dudziak at 11:10 AM