In March 1934, Colonel Louis Howe, President Franklin Roosevelt’s longtime political advisor, forwarded to an assistant to Attorney General Homer Cummings a letter from a Mr. S. H. Jackness on New York City. The letter does not survive in the Justice Department’s files, but apparently Jackness detailed the piteous circumstances he endured as clerk in one of the city’s law firms and asked FDR to help him persuade the National Recovery Administration to adopt a code for apprentices and law clerks. The task of drafting a reply for the President fell to Alexander Holtzhoff, a career lawyer and irritant to New Dealers. Holtzhoff proposed that FDR inform Jackness that his letter was being forwarded to the NRA and that he wished the young lawyer well. He would have the president conclude on a sterner note: 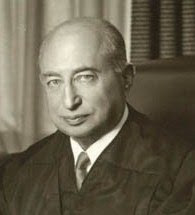 However, no worthy and ambitious young man desirous of attaining a place in the legal profession should be deterred or discouraged by the financial obstacles and difficulties confronting him in the early years of his career. Arduous toil and unremitting struggles have always been the portion of the law student and of the young lawyer. You have likely read the well known story of the great English advocate Erskine, who is said to have stated that he was emboldened to make his first important argument in a court of law by the thought that his little children were plucking his robe and begging for bread. You are undoubtedly also aware that many of the leaders, present and past of the American Bar, had a difficult financial struggle during the years of their law studies and the early period of their professional career.

One hopes that Roosevelt came up with his own, less admonishing response.

Image credit: Alexander Holtzhoff
Posted by Dan Ernst at 12:51 AM