WW II displaced persons, a history of Europe, the Civil War, and more in the book reviews

THE LONG ROAD HOME: The Aftermath of the Second World War by Ben Shephard "tells a vastly complicated story" of displaced persons in Europe after World War II, writes Matthew Price in the Boston Globe. 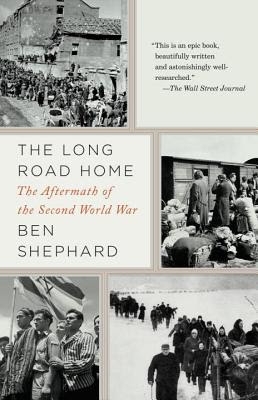 What unfolded from 1945-1950 was intensely political, caught up in Cold War intrigue and the founding of the state of Israel....
As Shephard shows, the DP issue had global implications and not only in the Near East. Many non-Jewish displaced persons — Poles, Balts, Ukrainians, some of whom had collaborated with Germany — were reluctant to return to communist-dominated Eastern Europe. They made their way to jobs in Belgium and Great Britain; others journeyed as far as Australia. The United States was a popular choice, but anti-immigrant sentiment delayed the arrival of significant numbers of DPs. In the end, the United States took some 380,000 of them.

Eisenhower 1956: The President's Year of Crisis — Suez and the Brink of War by David A. Nichols is reviewed in the Los Angeles Times.  Also in the LA Times, a round-up of several Civil War books.

The Penguin History of Europe by J. M. Roberts is taken up in Salon/Barnes&Noble Reviews.  FORTUNATE SONS:  The 120 Chinese Boys Who Came to America, Went to School, and Revolutionized an Ancient Civilization by Liel Leibovitz and Matthew Miller is discussed in the New York Times.
Posted by Mary L. Dudziak at 4:00 AM