The latest from Stuart Banner, a Mets fan, a former little league coach, and the Norman Abrams Professor of Law at the UCLA School of Law, is The Baseball Trust: A History of Baseball's Antitrust Exemption, published by Oxford University Press.  Saith the press: 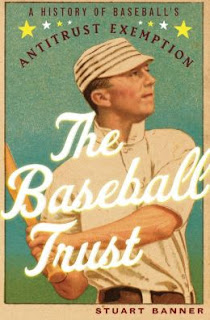 The impact of antitrust law on sports is in the news all the time, especially when there is labor conflict between players and owners, or when a team wants to move to a new city. And if the majority of Americans have only the vaguest sense of what antitrust law is, most know one thing about it-that baseball is exempt.

In The Baseball Trust, legal historian Stuart Banner illuminates the series of court rulings that resulted in one of the most curious features of our legal system-baseball's exemption from antitrust law. A serious baseball fan, Banner provides a thoroughly entertaining history of the game as seen through the prism of an extraordinary series of courtroom battles, ranging from 1890 to the present. The book looks at such pivotal cases as the 1922 Supreme Court case which held that federal antitrust laws did not apply to baseball; the 1972 Flood v. Kuhn decision that declared that baseball is exempt even from state antitrust laws; and several cases from the 1950s, one involving boxing and the other football, that made clear that the exemption is only for baseball, not for sports in general. Banner reveals that for all the well-documented foibles of major league owners, baseball has consistently received and followed antitrust advice from leading lawyers, shrewd legal advice that eventually won for baseball a protected legal status enjoyed by no other industry in America.

As Banner tells this fascinating story, he also provides an important reminder of the path-dependent nature of the American legal system. At each step, judges and legislators made decisions that were perfectly sensible when considered one at a time, but that in total yielded an outcome-baseball's exemption from antitrust law-that makes no sense at all.

As you might expect, baseball fans in the ranks of American legal historians have stepped up to the plate and blurbed away:

"This is the best single-volume history of baseball's antitrust exemption. Prof. Banner does an excellent job mining primary sources to show how savvy lawyers and baseball officials laid the groundwork for 'baseball's bizarre monopoly.' Banner brings a lawyer's rigor, a historian's discerning eye, and a baseball fan's ear to this very important work of baseball and American legal history. This is a tale that needed to be told."
-Brad Snyder, author of A Well-Paid Slave: Curt Flood's Fight for Free Agency in Professional Sports

"One of the great puzzles of the history of both baseball and anti-trust law is the 'exemption' granted to the baseball industry from anti-trust law. Nearly everyone agrees that the exemption, which is not available to other professional sports, makes very little sense as a matter of law or economics. Stuart Banner demonstrates that the exemption was not intended to serve the usual reason for avoiding anti-trust laws, but rather to preserve baseball's 'reserve clause,' which bound players indefinitely to their clubs and thereby reduced the players' leverage. By following shrewd advice from lawyers, organized baseball was able to convince both the courts and Congress that replacing the reserve clause with free agency would undermine competitive balance. Even though this turned out not to be the case, baseball's anti-trust exemption remains in place. Banner's book will be the place to start in understanding that curious anomaly."
-G. Edward White, author of Creating the National Pastime
Posted by Dan Ernst at 11:00 AM