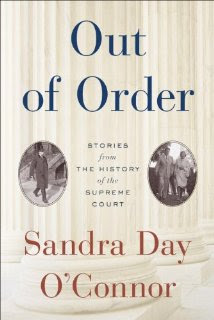 The Washington Post and the New York Times have reviews of Sandra Day O'Connor's new book Out of Order: Stories from the History of the Supreme Court (Random House).  "O'Connor avoids any sharp commentary regarding disputes in which she played a leading role," Joan Biskupic writes in the NY Times, "for example testing the rights of Guantanamo detainees after the Sept. 11, 2011, terrorist attacks."  But "the reader will appreciate insights on life inside the marble bastion."  Read Biskupic's review here.

According to Michiko Kakutani, "the reason to read Out of Order is to get Justice O'Connor's succinct, snappy account of how today's court-- so powerful, so controversial and so frequently dissected by the media-- evolved from such startlingly humble and uncertain beginnings that it initially seemed like a jerry-build enterprise constructed on ad hoc principles."  Read on here. 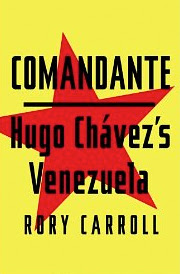 With the death of Venezuelan President Hugo Chavez this week, the Washington Post has a review of journalist Rory Carroll's Comandante: Hugo Chavez's Venezuela (Penguin), which "traces Chavez'z single-minded rise to power, from a humble boyhood in the dusty town of Barinas through a meteoric trajectory in the army and, eventually, to his 1992 military coup attempt that landed him in prison and made in a national hero."

Also in the Washington Post this week: a review of Jeb Bush and Clint Bolick's Immigration Wars: Forging an American Solution (Threshold), and a review of Moises Naim's The End of Power: From Boardrooms to Battlefields and Churches to States, Why Being in Charge Isn't What it Used to Be (Basic).  And in the New York Times, you'll find a review of Benn Steil's The Battle for Bretton Woods: John Maynard Keynes, Harry Dexter White, and the Making of a New World Order (Princeton), and a review of Susan Jacoby's The Great Agnostic: Robert Ingersoll and American Freethought (Yale).


Anne-Marie Slaughter reviews Sheryl Sandberg's Lean In: Women, Work, and the Will to Lead (Knopf).  "Her point," Slaughter writes "is that notwithstanding the many gender biases that still operate all over the workplace, excuses and justifications won't get women anywhere."  Read the full review here.  And, at the LA Times, Rebecca Traister has a review of Lean In.  Traister hopes "that the early wave of criticism of Sandberg's project-- which has come largely from other feminists making an affronted stink about the narrow luxury of her perch-- doesn't convince her that the women's movement can't use the dynamism, extensive resources, and fresh inspiration she's offering here.
Posted by Clara Altman at 8:49 AM