Shaping Legal Cultures from Late Antiquity to the Middle Ages 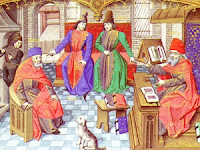 This one-day conference will explore ways in which region affected the "packaging" of legal traditions within disparate cultures that flourished in geographic contiguity between the sixth and the twelfth centuries. Students of late Roman, Sassanian, Byzantine, Jewish, Islamic and Christian canon law will consider how their respective traditions of law were shaped by such extra-legal phenomena as patronage networks, institutions, circumstances of material production, compositional choices, modes of disseminating law and jurisprudential theories. By facilitating awareness of the regionalism of certain formative, extra-legal factors, this cross-cultural collaboration should stimulate new avenues of historical research.

Graduate students from outside the Philadelphia area may be eligible for a modest transportation stipend. Those interested should contact Chrissy Walsh at chwalsh@sas.upenn.edu for further information.