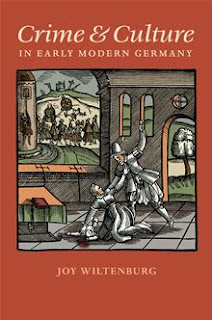 Many people complain about sensationalism in the press. If a man slaughters his entire family, a jilted lover kills her erstwhile boyfriend, or a high school student murders several of his classmates, it’s going to be “all over the news.” But it’s hard to blame the press, exclusively at least. Joy Wiltenburg‘s Crime & Culture in Early Modern Germany (University of Virginia Press, 2012) suggests (to me at least), that those who criticize the press for sensationalism have cause and effect reversed: the press doesn’t cause demand for sensational stories, the people who buy the press do. When the “press” first emerged in the sixteenth century, “demand” for “if it bleeds, it leads” style reporting seems to have been already quite developed. There’s just something emotionally compelling about a man who chops up his family. The early modern Germans wanted to read about and so do we. Joy explains why.