A little belatedly, here is a post on Law’s History: American Legal Thought and the Transatlantic Turn to History, by David Rabban, a member of the law faculty at the University of Texas at Austin.  The book appears in the series Cambridge Historical Studies in American Law and Society, edited by Christopher Tomlins. Cambridge provides a brief description: 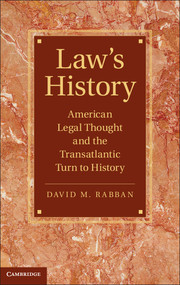 This is a study of the central role of history in late-nineteenth century American legal thought. In the decades following the Civil War, the founding generation of professional legal scholars in the United States drew from the evolutionary social thought that pervaded Western intellectual life on both sides of the Atlantic. Their historical analysis of law as an inductive science rejected deductive theories and supported moderate legal reform, conclusions that challenge conventional accounts of legal formalism Unprecedented in its coverage and its innovative conclusions about major American legal thinkers from the Civil War to the present, the book combines transatlantic intellectual history, legal history, the history of legal thought, historiography, jurisprudence, constitutional theory, and the history of higher education.

Here are some of the blurbs:

"This is a pioneering study of American historical jurisprudence in the late nineteenth century. It is comprehensive, meticulous, and deeply learned. It is cosmopolitan, placing the Americans among their European predecessors and counterparts. And it is eye-opening: the standard picture of this era's legal scholars as political reactionaries and abstract deductive 'formalists' cannot possibly survive this splendid and important book." – Robert W. Gordon, Stanford Law School

"This accomplished work of intellectual legal history is the first complete account of American legal thought from the rise of Classical Legal Thought in the 1870s to the Sociological Jurisprudence of the pre–World War I era. Though it offers many illuminating challenges to conventional wisdom in the field, the book's first goal is to overthrow the still dominant Holmesian picture of Classical American legal thinkers as unhistorical prisoners of logic. Rabban shows instead the pervasive influence of historical consciousness on leading American legal thinkers, many of them influenced by Darwinian evolutionary ideas." – Morton Horwitz, Charles Warren Professor of American Legal History, Harvard Law School

"Law's History is an important analysis of the historical mentality of late-nineteenth-century legal scholarship and a revealing guide to ways twentieth-century scholars have interpreted it." – Dorothy Ross, Johns Hopkins University

"A remarkable book. Rabban amply documents the 'Atlantic crossings' in legal scholarship at the turn of the twentieth century and unpacks the deep connections between history and law in modern American and continental legal thought. Essential reading for those interested in the intellectual history of law." – Keith E. Whittington, Princeton University

We look forward to Professor Rabban's guest blogging on the book next month.
Posted by Dan Ernst at 12:00 PM