[We have the following call for papers.] 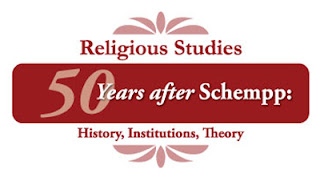 The Department of Religious Studies at Indiana University-Bloomington is hosting a conference entitled “Religious Studies 50 Years after Schempp: History, Institutions, Theory” the weekend of September 27-29, 2013.

Fifty years ago the Supreme Court of the United States announced its decision in Abington v Schempp, 374 U.S. 203 (1963). While the case before the Court concerned the constitutionality of mandatory Bible reading in Pennsylvania public schools, the opinions in the case have come to be understood as the authorizing texts for the academic study of religion in public colleges and universities across the U.S. and beyond. The Court wrote that while prescribing religious exercises in public schools violates the establishment clause of the First Amendment to the U.S. Constitution, “a study of comparative religion or the history of religion and its relationship to the advancement of civilization” could be said to be a necessary part of a complete education.

The years following the Schempp decision witnessed a flourishing of departments of religion in public colleges and universities and an intense conversation about the appropriate approach to the academic study of religion in the U.S. context. Now, fifty years later, the anniversary of the decision provides an occasion for an appraisal of Schempp’s role and for a broader assessment of the past, present, and future of the field of religious studies. This conference will explore the impact that Schempp may have had on the comparative and multi-disciplinary nature of the study of religion as well as other significant influences on shifts in the study of religion over that time.

We invite proposals for papers across the disciplines of religious studies. While Schempp provides a focal point for the conference, we invite conferees to propose 20-minute paper presentations that consider the broader history and phenomenology of the study of religion in the multiple locations in which such study takes place, private and public.

Three plenary speakers have been invited to focus our conversations:

Sarah Barringer Gordon, Arlin M. Adams Professor of Constitutional Law and Professor of History at the University of Pennsylvania Law School. Gordon is a widely recognized scholar and commentator on religion in American public life and the law of church and state.

Gerald J. Larson, Rabindranath Tagore Professor Emeritus of Indian Cultures and Civilization, Indiana University, Bloomington, and Professor Emeritus, Religious Studies, University of California, Santa Barbara. Larson, a prominent scholar of Indian religious traditions who helped to shape the study of religion at the University of Tennessee, UC Santa Barbara, and Indiana University, will offer reflections on the place of the study of Asian religions in the academic study of religion.

Charles H. Long, Emeritus Professor of Religious Studies at UC Santa Barbara, and former professor of religion at the University of Chicago, UNC Chapel Hill, Duke University, and Syracuse University. Long, a distinguished historian of religion and leading scholar in the study of American religion, had a direct influence on the development of the academic study of religion in the latter part of the twentieth century.

Applicants are invited to send a proposal with a title, a 300-word abstract, and a two-page CV to the following address by May 1, 2013. Applicants may submit their materials as Word attachments. Send to: Professor David Haberman, Department of Religious Studies, Sycamore 230, Indiana University, Bloomington, IN 47405; dhaberma@indiana.edu with a cc copy to kfrancoe@indiana.edu.

In order to keep track of numbers, we ask that attendees complete a brief registration form. Please download the form here.
Posted by Dan Ernst at 1:00 PM