Conflict or Humanity, the Influence of King's "Letter From Birmingham Jail," and More: This Week in the Book Pages 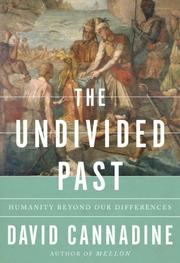 This week in the New York Times Alan Wolfe reviews David Cannadine's The Undivided Past: Humanity Beyond Our Differences (Knopf).  Here's the intro:


In “The Undivided Past,” David Cannadine challenges those who believe that all history is the history of conflict, whether over class, as Marx and Engels proclaimed, or over religion, nationality, race, gender or civilization. The fact is, mankind’s divisions may not be the most important part of the story. As Cannadine succinctly puts it, “humanity is still here.”

The New York Times also has a review of Megan Marshall's Margaret Fuller: A New American Life (Houghton Mifflin), and a review of four books on Chicago including The Third Coast: When Chicago Built the American Dream (Penguin) by Thomas Dyja.

In the Wall Street Journal, Barton Swaim reviews Gospel of Freedom: Martin Luther King, Jr.'s Letter from Birmingham Jail and the Struggle that Changed a Nation (Bloomsbury) by James Rieder, an account of the "origins and influence of King's "Letter From Birmingham Jail." Also in the Wall Street Journal, a review of The Wrath of Cochise: The Bascom Affair and the Origins of the Apache Wars (Pegasus) by Terry Mort and Geronimo (Yale) by Robert M. Utley, two new books that offer "unvarnished accounts of the last Indian wars that ravaged the Southwest."

And, in the Washington Post, Gerard DeGroot reviews two new books on the origins of the world wars: Christopher Clark's The Sleepwalkers: How Europe Went to War in 1914 (Harper) and Lynne Olson's Those Angry Days: Roosevelt, Lindbergh, and America's Fight over World War II, 1939-1941 (Random House).
Posted by Clara Altman at 8:44 AM