Norgren's "Rebels at the Bar"

Jill Norgren, professor emerita at John Jay College and the University Graduate Center, The City University of New York and the author of (among other books) Belva Lockwood: The Woman Who Would be President has recently published Rebels at the Bar: The Fascinating, Forgotten Stories of America's First Women Lawyers with the NYU Press, which is offering the book at a 20 percent discount (Promo code = REBEL13).  We learn from the press: 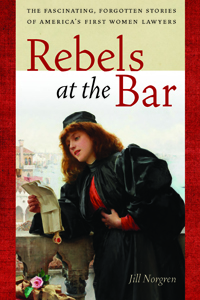 In Rebels at the Bar, prize-winning legal historian Jill Norgren recounts the life stories of a small group of nineteenth century women who were among the first female attorneys in the United States. Beginning in the late 1860s, these determined rebels pursued the radical ambition of entering the then all-male profession of law. They were motivated by a love of learning. They believed in fair play and equal opportunity. They desired recognition as professionals and the ability to earn a good living.

Through a biographical approach, Norgren presents the common struggles of eight women first to train and to qualify as attorneys, then to practice their hard-won professional privilege. Their story is one of nerve, frustration, and courage. This first generation practiced civil and criminal law, solo and in partnership. The women wrote extensively and lobbied on the major issues of the day, but the professional opportunities open to them had limits. They never had the opportunity to wear the black robes of a judge. They were refused entry into the lucrative practices of corporate and railroad law. Although male lawyers filled legislatures and the Foreign Service, presidents refused to appoint these early women lawyers to diplomatic offices and the public refused to elect them to legislatures.

Rebels at the Bar expands our understanding of both women’s rights and the history of the legal profession in the nineteenth century. It focuses on the female renegades who trained in law and then, like men, fought considerable odds to create successful professional lives. In this engaging and beautifully written book, Norgren shares her subjects’ faith in the art of the possible. In so doing, she ensures their place in history.

"I read these stories of the first generation of women lawyers with awe and gratitude. We are all in their debt—and in Jill Norgren's, too, for recovering this forgotten history."
—Linda Greenhouse, Knight Distinguished Journalist in Residence and Joseph M. Goldstein Senior Fellow, Yale Law School

Here are the table of contents, with links to some of the related literature on the first women lawyers:

Other notable writings on the first generation of woman lawyers LHB readers should consider are two works by Virginia Drachman, Sisters in Law: Women Lawyers in Modern American History (Cambridge: Harvard University Press, 1998) and Women Lawyers and the Origins of Professional Identity in America: Letters of the Equity Club, 1887-1890 (Ann Arbor: University of Michigan Press, 1993) and the website that Barbara Babcock has long maintained at Stanford Law.
Posted by Dan Ernst at 3:30 AM