FDR, Historians and Capitalism, and More: This Week in the Book Pages 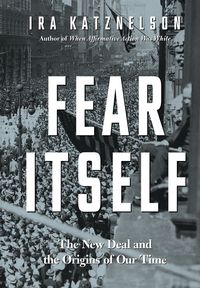 The New York Times this week has two reviews of books about Roosevelt.  Kevin Boyle reviews Ira Katznelson's Fear Itself: The New Deal and the Origins of Our Time (Liveright).  As Boyle explains, Katznelson argues that "Roosevelt's defense of democracy...rested in large part on his willingness to work with political forces that had no commitment to democratic ideals."  These forces included a "brief flirtation with quasi-fascist economic planning," and "to push their legislative programs through Congress, the New Dealers sold their souls to the segregated South."  Read the full review here.

David Oshinsky reviews FDR and the Jews (Belknap) by Richard Breitman and Allan J. Lichtman.  Oshinsky writes that FDR and the Jews is "the latest, and most thoughtful, entry into [the] scholarly minefield" of books addressing the "troubling moral question" of what Roosevelt did in his time in office to "protect the Jews of Europe from Nazi genocide."

Also in the New York Times this morning, "In History Departments, It's Up with Capitalism."  Here's a sample:


After decades of “history from below,” focusing on women, minorities and other marginalized people seizing their destiny, a new generation of scholars is increasingly turning to what, strangely, risked becoming the most marginalized group of all: the bosses, bankers and brokers who run the economy.

Other book reviews of interest this week:

The LA Times has a review of several books about baseball including Stuart Banner's The Baseball Trust: A History of Baseball's Antitrust Exemption (Oxford).
Posted by Clara Altman at 8:22 AM