During April, Comparative Studies in Society and History is providing access to three essays, each of which treat how states make jurisdictions and how people manage or fail to work around them.

Frontier as Resource: Law, Crime, and Sovereignty on the Margins of Empire by Eric Lewis Beverly 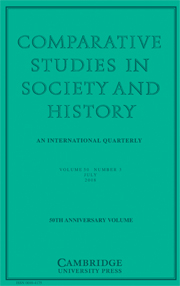 Nineteenth-century European colonialism produced a textured and uneven legal terrain rather than homogeneous imperial units. The fragmentation of sovereignty between empires and subordinated states created frontier zones that unsettled the workings of governance. This article views the developing landscape of power in high colonial South Asia from the loosely controlled frontier zone between Hyderabad, a Princely State ruled by sovereign Muslim dynasts titled Nizams, and the Bombay Presidency, part of Britain's Indian Empire, or Raj. I argue that the heterogeneous legal terrain along the border was a useful resource for administrators and subjects. State officials of both Hyderabad and Bombay justified various projects there; subjects of the two states shopped forums in a legal pluralist environment; and populations on either side of the border whose livelihoods and political agendas ran afoul of social pressures or the economic and cultural imperatives of state projects fled there from adversity. I examine cases of alleged cattle rustlers, bandits, and prostitutes and their engagements with police and courts to explore the political challenges and possibilities the frontier offered different groups. Colonial attempts to extend racialized policing practices across the frontier were frequently met by machinations of marginal people trying to avoid imprisonment or extricate themselves from oppressive social structures. Such figures could use the ambiguity of frontier legal authority to their advantage. The picture that emerges is one of a brute and often-arbitrary colonial power offset by alternative malleable sovereignties that resourceful subjects could play against one another.


This essay highlights the role of thousands of nineteenth-century Alexandrian residents with multiple extraterritorial legal identities. The manner with which extraterritoriality was practiced in Egypt effectively gave Western consulates legal jurisdiction not only over their citizens but also over all those able, through whatever means, to acquire protégé status. Many Alexandrians acquired legal protection from multiple consulates, shifting their legal identities in order to maximize their immediate social and economic interests. These legal realities present historians with the dilemma of how to account for and “classify” this highly flexible and syncretic society. I strive to answer this question through the use of a borderland lens. Realizing that the heart of Egypt's borderland society was legal has led me to consider the concept of “jurisdictional borderland” as a productive method for examining the complexity of Egypt's nineteenth-century heterogeneous population. I define a jurisdictional borderland as a significant contact zone where there are multiple, often competing legal authorities and where some level of jurisdictional ambiguity exists. Jurisdictional borderlanders have their own unique and independent agenda that often conflicts with many of the competing “national” or imperial positions. Without an allegiance to any single government—be it Egyptian, Ottoman, or Western—and living in a peripheral environment with multiple, separate, and often competing “national” institutions, these borderlanders thrived in the jurisdictional spaces created in between multiple authorities. I conclude by suggesting how a jurisdictional borderland lens is useful for globally investigating other colonial and precolonial cities, many of which had similar extraterritorial legal systems.

Turk and Jew in Berlin: The First Turkish Migration to Germany and the Shoah by Marc David Baer


In this paper I critically examine the conflation of Turk with Muslim, explore the Turkish experience of Nazism, and examine Turkey's relation to the darkest era of German history. Whereas many assume that Turks in Germany cannot share in the Jewish past, and that for them the genocide of the Jews is merely a borrowed memory, I show how intertwined the history of Turkey and Germany, Turkish and German anti-Semitism, and Turks and Jews are. Bringing together the histories of individual Turkish citizens who were Jewish or Dönme (descendants of Jews) in Nazi Berlin with the history of Jews in Turkey, I argue the categories “Turkish” and “Jewish” were converging identities in the Third Reich. Untangling them was a matter of life and death. I compare the fates of three neighbors in Berlin: Isaak Behar, a Turkish Jew stripped of his citizenship by his own government and condemned to Auschwitz; Fazli Taylan, a Turkish citizen and Dönme, whom the Turkish government exerted great efforts to save; and Eric Auerbach, a German Jew granted refuge in Turkey. I ask what is at stake for Germany and Turkey in remembering the narrative of the very few German Jews saved by Turkey, but in forgetting the fates of the far more numerous Turkish Jews in Nazi-era Berlin. I conclude with a discussion of the political effects today of occluding Turkish Jewishness by failing to remember the relationship between the first Turkish migration to Germany and the Shoah.